Wg Cdr (Ret’d) Bill Ramsey, was a leading pilot in the RAF between 1972 and 2008 and was one of their principal V-Bomber, display & instructor pilots for nearly 30 years. Bill’s presentation is his personal story of around 50 years’ involvement with mostly military aviation. Briefly covering his operational career – an even split of nuclear bomber pilot and flying instruction – it moves on to his eventual career in the display world, a tale of persistence and luck.

The main part of the presentation covers his time as a display pilot, with the Battle of Britain Memorial Flight – piloting the Lancaster and the Dakota, his four years as the senior supervisor to the Red Arrows, and time as the RAF solo aerobatic display pilot for the Grob Tutor. Subsequently Bill returned to Vulcan flying with Vulcan XH558 and he was the last aircraft captain on the final flight in 2015.

This evening will provide an exceptional glimpse into the role of RAF Waddington, the hub of UK’s Air Intelligence, Surveillance, Target Acquisition and Reconnaissance (ISTAR), supporting UK, NATO and coalition operations. Waddington is one of the RAF’s busiest stations and is the main operating base for airborne intelligence systems.

The talk promises to give a unique insight into how Air ISTAR is the RAF’s, and hence the Nation’s, eyes and ears in the sky, Waddington’s capabilities providing military commanders with information about activity in the air, on the ground and on the sea, to inform decision making and to focus the effect of other capabilities, thereby delivering perational success. 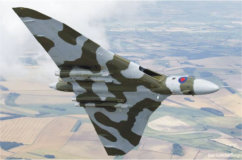 AirACES is an aviation talk society, providing its members with regular talks, given by experts in many different fields related to the world of aviation. These talks cover subjects such as test flying, piloting iconic aircraft, RAF, aviation industry, air displays and many other related topics.

The talks are held at the Chichester Park Hotel, Westhampnett Road, Chichester, 7.00 for 7.30 pm. Tickets available on the door. Admission for members is £3, non-members £5 and under 16s FREE.