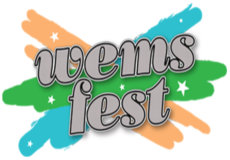 WemsFest Artistic Director Mark Ringwood said “I don’t think anyone really thought ahead in terms of how many events we’d actually present because we started by just wanting to host an annual arts festival and the ball’s just kept on rolling.  We’ve put on events as far afield as Worthing, made Emsworth into the world’s first ever Red Nose Town, staged a massive commemoration of D-Day, regularly commemorated Emsworth’s links with P G Wodehouse, marked the demolition of the Emsworth gas-holder, and brought musicians from as far afield as Colombia, Australia, Canada, Nigeria, Palestine, Hungary, Zimbabwe, USA, and The Congo, to a range of different venues.  For some reason Scottish music has always proved extremely popular and aside from Breabach we’re presenting Ross Ainslie & Ali Hutton’s Symbiosis, Capercaillie’s singer Karen Matheson and her band, the 8-piece band Skerryvore, and The Tannahill Weavers this year.

This year also sees a return to Comedy through a partnership with Jeff Lane and a further evening of comedy is scheduled at Emsworth Sports and Social Club on 8 March.

Having spent quite a bit of 2018 restructuring the organisation Mark feels WemsFest is in a much better place to deliver other projects in addition to live music and comedy.  One project on the horizon is to try and get every household to grow a Sunflower.  He says that this sends out a strong ecological signal because Sunflowers are important to bees, and it will bring a splash of colour to the area.  Another project is to create a series of storyboards around both Emsworth and Westbourne which will show what a particular street scene looked like up to 120 years ago.  We’re constantly changing our boundaries and having to plan further and further ahead – hence the fact we’ve just confirmed Folk icon Julie Felix for a solo show at Emsworth Baptist Church on Saturday 19 October.

We welcome input and assistance from the community we try to serve and if anyone’s interested in being involved they’re welcome to contact us: 07802 500050 or wemsfest@btinternet.com.