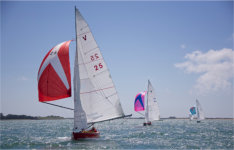 A special regatta weekend of racing and an anniversary party has been planned for the 95th birthday of the Solent Sunbeam class over the 26th – 27th May. closing with an anniversary party at 19:30. This pretty, classic, three-man keelboat designed by Alfred Westmacott in 1923 has been continuously sailing in the Solent for 95 years and has its base at Itchenor Sailing Club. The very first Sunbeam – Dainty, No. 1 – is still actively raced today as are several boats that were built in the early 1920’s.

We look forward to welcoming many regular sailors at the anniversary weekend taking place at Itchenor Sailing Club, PO20 7AG from 3pm. Please use the contact details below if you would like further info.