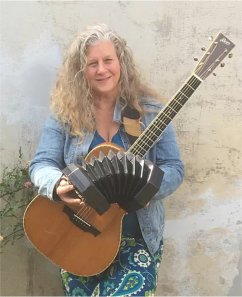 WEDNESDAY 11 SEPTEMBER – KRISTINA OLSEN
Unique performer and itinerant troubadour, Californian Kristina Olsen performs in folk clubs all over the world.  Deft and exciting, Olsen’s guitar playing weaves and blends musical styles, drawing on folk, blues, jazz, melodic pieces and slide guitar, often defying genres.  Her frequently racy songs cover all of human existence and audiences remain entranced throughout: “She’s talented, funny, and observant, and consequently she becomes the witty friend who shares her life with you, not preaching to you or insisting on our praise to maintain the friendship. (Roots & Reel); "Kristina once seen and heard is not easily forgotten. Her skills in writing and performance along with the charm of her musical personality have always ensured this - miss them and miss out" (Simon Nicol, Fairport Convention); “This is Olsen playing solo to the world, and the results are stunning...playing slide guitar with a fury, finely crafted songs, personal and delivered with fire...” (Folk Almanac).  Do not miss! http://www.kristinaolsen.net 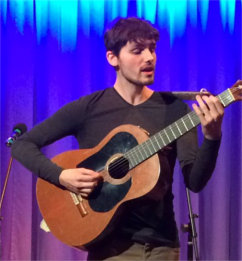 WEDNESDAY 09 OCTOBER – AN EVENING OF LOCAL TALENT – featuring DOM PRAG and others (tba)
Dom Prag gave us an impressive floor spot a few months ago so we are looking forward to enjoying a longer performance.  Dom’s music knits together British and European folk tradition, classical guitar, mining songs, poems set to music, compositions influenced by Schubert and Shostakovich, bluesy riffs and raw vocals. His own songs form part of his act. He is an exciting performer who has absorbed much from the tradition, has originality and is easy in his engagement with the audience.  “Dom Prag takes the place by storm with his energy, wonderful singing and beautiful Spanish guitar playing - he's a seriously talented young folk singer on the way to great things” (Mike Peach, The Anchor Folk Club); “We have seen the future of folk music and it is in good hands” (Steve West, Lymington Folk and Blues Club)  www.domprag.com