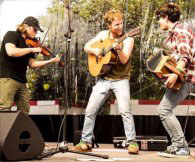 Moore Moss Rutter are Tom Moore (fiddle), Archie Churchill-Moss (melodeon) and Jack Rutter (guitar and vocals), an immensely talented trio who won the BBC’s prestigious Young Folk Award in 2011. Hailing from Norfolk, Somerset and Yorkshire respectively they bring a wealth of influences to their music and together create an imaginative and spirited sound. Their use of tone, texture and dynamic is outstanding as they present a well-balanced mix of traditional and contemporary tunes and songs with skilful maturity and sophistication. Their 2018 album “III”, recorded “live in the Room”, is described as a melting pot of influences which feels unmistakably current. “They play with utter sincerity, sensitivity and a refreshingly natural flair, it places them in the very heart of the new British folk scene … enduringly pleasing.” (folkROOTS); “Giving English traditional music the love and respect it deserves, with dreamy reinterpretations”

WEDNESDAY 13 FEBRUARY – THE JAMES BROTHERS - Not to be missed! 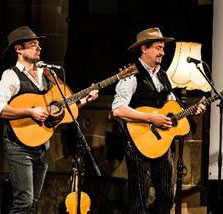 Neither outlaws, nor brothers (and only one called James!), The James Brothers are from Down Under: James (vocals, guitar, bouzouki) from Australia and Jamie (vocals, fiddle, whistle, guitar) from New Zealand. Superb musicians both, James (best known as one half of the duo Nancy Kerr & James Fagan) has played with The Cara Dillon Band and Bellowhead while Jamie (one half of a duo with Emily Smith) has played with Sharon Shannon, Beth Nielson Chapman and Jerry Douglas. Together (“off the leash” as they put it), they play songs and tunes from their homelands (sometimes described as “colonial roots music”) along with several of their own making. "That was probably one of the most enjoyable evenings we've ever had. Great music, great fun. I'm probably preaching to the converted but, if you have the chance to see them, see them!” (Lawrence Heath, Promoter, Guildford Music Institute); “Superb night of Antipodean music” (Tuppenny Barn, Southbourne)