Greg Russell and Ciaran Algar - Although Greg Russell visited Hambledon as a solo artist two years ago (and went down a storm), he also plays with Ciaran Algar and together they are a formidable duo in the folk world.  Having joined forces in 2011 they combine Russell’s powerful vocals and driving guitar style with Algar’s All-Ireland winning fiddle playing.  The pair have gone on to become one of the most sought after acts on the British folk scene. In 2013 they won the BBC Radio 2 Young Folk Award before going on to win the Horizon Award for best breakthrough act from the same source in 2014. In 2015, they were nominated in the BBC Radio 2 Folk Award Best Duo category.  Russell and Algar have released 3 acclaimed studio albums and toured extensively in the UK as well as in Denmark, Germany and The Netherlands.  We are excited to be welcoming them to Hambledon. “Folk at its very best” (Maverick); “invigorating…infectious joy” (Songlines); “Brimming with passion” (FRUK). http://russellalgar.co.uk . 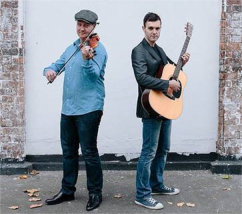 A welcome return of this dynamic duo – one Englishman; one American - who proved so popular on their first appearance here in 2014. James’s emotive, soaring vocals and driving guitar are complemented by Dan’s ingenious, virtuoso fiddling. Together they cover a wide range of music including Irish fiddle tunes, bluegrass, traditional and contemporary folk songs, blues and swing; their sound bursting with the humour, heartbreak and excitement of these genres.  “With their creativity cut loose, they move from original songs, crammed with poignant lyrics to jaw dropping instrumentals and traditional pieces from the US and UK” (Wild Hare Club, Hereford).  “Anybody who likes well played, well-chosen songs from both the British and American folk traditions should really enjoy these guys”. (The Jazz Mann).  And as our Club reviewer put it in 2014: “James and Dan are not only superb musicians but have one of the most amusing acts to be seen in Hambledon for some time. Not a simple comic versus straight man, more a double helping of dry self-depreciation.” ttp://hickmanandcassidy.co.uk 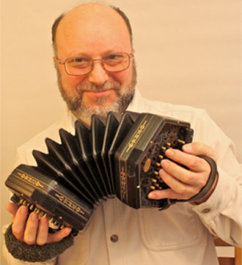 Jody Kruskal presents an eclectic mix of American old-time and blues songs and music, singing to his fabulous accompaniments on his Anglo Concertina. Hailing from New York City, he loves to perform in the UK where his concerts offer a warm and engaging solo presentation of traditional and popular American songs of yesteryear.  Songs range from witty and humorous ditties to those which explore the depths of the human condition – all with plenty of opportunity to join in the chorus.  Add to all this the antics of Henry, his dancing puppet, and you have an evening’s entertainment to remember!  “What a performer!” (Ryburn Folk Club). “Technical fireworks… exceptional skills… very exciting playing… he’s (even) able to make the Anglo-concertina sound like a mouth organ…!” (The Goose is Out). “Jody is an Anglo concertina virtuoso from the USA with a joyful, energetic & distinctive style; he’s a master of American contra dance, old-time and music-hall. He’s a fine singer. He writes stonkingly good tunes, too.” (Lewes Folk Club).
http://jodykruskal.com

Wednesday 12 December - Christmas Special - The Drystones -  Alex Garden (fiddle and vocals) and Ford Collier (guitar, whistle and vocals), are an award-winning, young, lively folk duo from Somerset who’ve made a big splash on the folk scene since they formed in July 2011. Combining traditional music’s timeless union of fiddle and guitar with technical mastery and an unexpectedly large sound, it’s no wonder they’ve been described as “indecently talented” (Mike Harding) and earned themselves a nomination for the 2018 BBC Radio 2 Young Folk Award. They have played at festivals across the country, including Sidmouth and Glastonbury, and supported Seth Lakeman and Steeleye Span.  The Drystones will be including a range of seasonal songs and tunes amongst their repertoire to ensure a festive spirit all round.  And there’ll be a mince pie and a glass of cider/juice for everybody too!  “Absolutely blown away by their energy.” (Will Lang – Halsway Manor Centre for Folk Arts); “Fabulous, I haven’t seen anything like it in 45 years of folk!” (Dave James – Bromyard Folk Festival).  https://www.thedrystones.co.uk