Monday 8th January
845 for 1930 hrs
‘The Sultan of Oman Air Force’ – Gp Capt Geoff Brindle RAF (Retd)
Gp Capt Geoff Brindle is one of the leading speakers in the world of aviation. In this talk he will explain about his role in helping the Sultan of Oman Air Force, with details of life there at that time, and how this air force grew and grew. Having led the armed forces in the Falklands in the period immediately following the Falklands War, in temperatures of -5 to -20 degrees C, in the late 1980s he was posted by the RAF to Oman, with temperatures there of 30 to 40 degrees C. At that time, the RAF were supporting the Sultan of Oman Air Force to become a powerful regional air force.

Monday 22nd January
1845 for 1930 hrs
The Miracle of Powered Flight – from Kitty Hawk to Cape Canaveral – Wg Cdr Tony Davies RAF (Retd)
Wg Cdr Tony Davies captained Vulcan and Victor bombers worldwide as well as being an RAF aerobatic display pilot before becoming a staff officer at National and NATO HQs, and subsequently joining BAE Systems. His very comprehensive illustrated talk will look at the extraordinary progression from the first powered flight by the Wright brothers in 1903 to the age of the space shuttle flying from Cape Canaveral.

The talks are held at the Chichester Park Hotel, Westhampnett Road, Chichester, 6.45 for 7.30 pm. Payment on admission, members £3, visitors £5 and under 16s FREE. 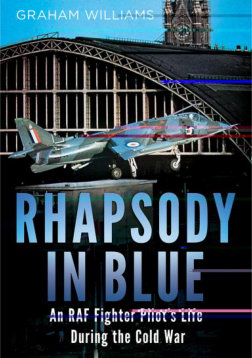 Monday 27th February
1845 for 1930 hrs
‘Rhapsody in Blue - A Cold war Fighter Pilot’s Tale’ including the 1969 Transatlantic Air Race Presented by Air Vice Marshal (Retd) Graham Williams.
Air Vice Marshal Graham Williams will be describing the experience of serving in the RAF during the Cold War Period. Graham started flying in a Tiger Moth before joining the RAF. After graduating from RAF Cranwell he flew the Hawker Hunter with 54 and 145 squadrons, based at RAF Chivenor in Devon. He also had a further tour in Aden before becoming a member of the Empire Test Pilots’ School at RAF Boscombe Down prior to becming Commanding Officer of a Harrier and Jaguar Squadron in Germany. He subsequently returned to the test world, as the CO - Experimental Flying, at Farnborough and finally as Commandant of Boscombe Down.

It was whilst at the Empire Test Pilots’ School that Graham was involved in the unique Transatlantic Air Race, flying in a Harrier from the centre of London, to the centre of New York. Although the story of this Air Race is a very well known to many, Graham will be adding his own inside knowledge, to the stories that have previously been written by pundits.