Veteran tennis players from home and abroad competed in the Seniors tournament, sponsored by KKM Deliveries of Portsmouth. The veterans exulted the excellent grass courts and the warm welcome and hospitality of the Club members and staff. The Avenue Clubâ€™s Ian and Pauline Udal won in the Over-45 mixed doubles, beating tournament organiser Neil Crawford and Heather Halliday in straight sets. Ian Udal completed a hat-trick of wins, taking the Over-45 menâ€™s doubles title with Martin Wilkinson from Warsash and beating the Avenueâ€™s Richard Steeds in the Over 45 singles final. Also in the Over-45 section, the Ladies doubles final featured Club coach Tracy Manvell and former Avenue member and Hampshire county captain Sue Espley. They lost a superb match to Linda Jones and Anita Pearce from Ventnor, Isle of Wight. The full results are available on: http://www.avenueltsc.co.uk/seniorstournament.html

The week 20 â€“ 24 July saw the Avenue Club host the second division games of the Aegon Summer County Cup. County week is a UK wide doubles tennis competition for men aged 18 â€“ 30. They compete for their Counties in several divisions at various venues. Two Counties are promoted and two relegated from each Division. Division Two matches are played annually at the Avenue Club. Being the second division, the standard of tennis is high. The week was rain affected and despite tinkering with the format as the week progressed, the tournament ended early when torrential rain prevented any play on the final day. Essex were promoted on winning Division 2, while at the other end Cambridgeshire took the wooden spoon and relegation to Division 3. Hampshire & IoW finished in mid table.

Louis Vuitton Americas Cup World Series Portsmouth
Americas cup racing returned to the Solent in July for the first time in 161 years. The inaugural event was a race around the Isle of Wight in 1854. The locally based Land Rover BAR team won the first Regatta in the 2015 Americas Cup World series event, as qualification began for right to face holders America in the 35th Americaâ€™s Cup. Racing off Southsea sea front had been scheduled for Saturday and Sunday 25 & 26 July. However, high winds put a stop to racing on the Sunday. The Land Rover BAR team, led by Sir Ben Ainslie, had a first and second place in the two spectacular races held on the Saturday in front of a crowd of over 70,000. In the event they were declared the winners of the first Americas Cup World Series qualifiers event. The Series moves on to Sweden for the next stage in the 2015 Louis Vetton series. The event will return to Portsmouth in 2016 and hopefully will enjoy better weather.

The visit of the Duke and Duchess of Cambridge brightened up an otherwise disappointing final day of the Regatta. The Royal couple joined the Land Rover BAR teamâ€™s champagne celebrations to mark their victory. 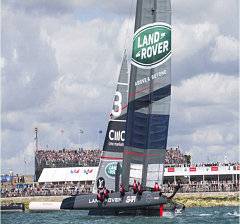 Cycling â€“ Tour de France
For the second time in three years British cyclist Chris Froome took the Yellow Jersey in the Tour de France in Paris on 26 July. Five years ago there had never been a British winner of the Tour. Now we have won it three times â€“ Sir Bradley Wiggins 2012, Chris Froome 2013 and 2015. As a Nation we have come a long way since our first attempt in the 1955 Tour. Back then only two of the starters in the British Hercules team made the finish, including Emsworthâ€™s legendary Tony Hoar. (See report in our Marchâ€“ April 2015 editions)

Talking to the BBC about the abuse meted out to Froome and the thinly-veiled doping accusations during the tour, Sir David Brailsford, the Australian General Manager of Team Sky explained the real reasons behind Team Skyâ€™s success. He said â€œWe recognised some time ago that there is a science for success in elite sport. It has been studied by sports scientists. We studied what the experts had said. We put it into practice and it works.â€ 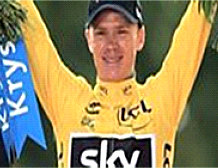 Triumphant Chris Froome as he wins the 2015 Tour de France