Three times in one Day

Local cyclist, and retired teacher, Mike Harbour from Rowlands Castle achieved a ride up the famous Mont Ventoux in France in for the first time in June 2013 and has ridden it three or four times since then.

Last year he challenged himself to do it again, but there are three choices of where to start, – Bédoin, Malaucène and Sault so he decided to attempt all three in one day, and to achieve each climb without putting a foot down until he reached the summit. 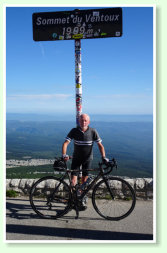 He writes : ‘I arrived in Malaucène  at about 6.30AM with the bike in the back of the car.   I cycled the nine miles round to Bédoin to start the first and the most challenging climb.

By 7.25 I was standing outside Bédoin on the route to the summit, cramming nuts and dates into my mouth.    The breeze, which had been worryingly strong when I had left the house earlier, was almost non-existent. For me this had always been the starting point for the southern climb, but I wanted to keep careful tabs on my time for this first climb. I needed to avoid going out too fast and ‘blowing up’ later.

The road enters the forest after Les Bruns and ramps up to a gradient of over ten percent in places. I knew that the climb would be unrelenting until I reached the Chalet Reynard some eight miles up the road. It was eerily quiet.   An older French rider drew alongside and we rode in silence together for a few kilometres before he gradually pulled ahead and disappeared out of sight.  'Don’t try to go with him,' I said to myself,

I found myself increasing my pace as I headed towards the summit over the bleak moonscape that is the upper slope of the Ventoux.  Then, almost without warning, onto the steep ramp up to the observatory and the post that marks the summit at 1,909m.

My time had been two hours and nine minutes, only ten minutes slower than my best ever. I had ridden much too fast, and I hoped that I would not pay for it later in the day.   I put on my light windproof jacket for the descent to Malaucène.

Back at the car I fuelled up, and headed back to start the second climb by just after eleven o’clock. Reaching the top was now feeling distinctly like hard work. A glance at my time, as I stood among fellow cyclists at the observatory, confirmed my worst fears. It was two hours and twenty-two minutes, I was paying for my earlier enthusiasm.

Down to Sault and a late lunch thanks to my wife Vanessa. We sat in the park with a view of the relatively gentle south eastern slope of the Ventoux and the lavender fields below.

The final climb would be the easiest and I knew that Vanessa would be nearby in the car,

I was back on the bike before four o’clock. Vanessa kept passing me in the car and began taking photos on the lower slopes.

At the summit I checked my time: one hour and fifty-six minutes. That was twenty-three minutes slower than I had previously climbed the mountain from Sault. There really was not much left 'in my tank'.  I descended at speed, but taking the opportunity to appreciate the mountains, bathed as they were in the golden, Provençal, evening light.'