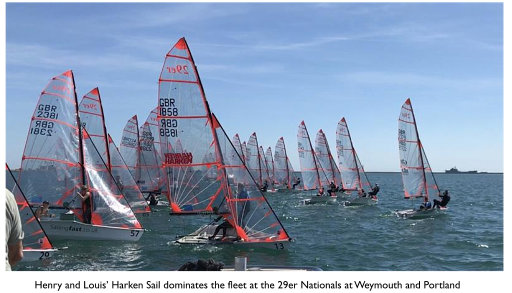 Two young Emsworth sailors, Henry Chandler and Louis Johnson, both just 15 years old, have had a very strong start to their sailing campaign in the 29er high performance sailing dinghy. The two sailors paired together at the start of the season and took part in the winter squad training at Hayling Island Sailing Club before embarking on a number of tough competitions during the summer. 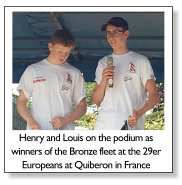 First up was the 29er National Championship which took place at the Weymouth and Portland National Sailing Academy in July. 75 boats took part in the event which started with two days of light wind sailing for the qualifying races where the boats fought for places in the Gold and Silver fleets. With strong competition from a number of sailors who were just back from competing in the World’s in California, Henry and Louis managed to gain a place in the Gold fleet, a great achievement for their first season. The winds picked up for the next two days and Henry and Louis led the junior ranking going into the final day. 25 knots plus met the sailors on the last day and only one race was sailed, after a capsize Henry and Louis finished 27th overall and 2nd Junior boat.

It was straight off to Quiberon in Southern Brittany for the 29er Europeans and a welcoming ceremony with 179 boats from 28 nations! Tough conditions, with strong winds on the first day and a highly competitive fleet from all over the world meant the boys finished the 3 days of qualifiers in Bronze fleet. Light winds dominated the main racing for the remaining three days with racing not starting one day until 5pm and the fleet not off the water till 8pm! The final day of racing in the stunning Quiberon Bay involved a frustrating wait for the wind but Henry and Louis were reward with first place in the Bronze fleet – a great first international result!

Winter will see the boys trial for the RYA Youth Squad as well as plenty of time on the water practising their racing techniques.

Henry and Louis are sponsored by Harken UK and Zhik.