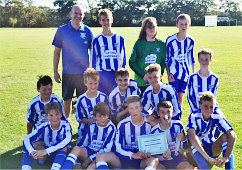 Hayling St Andrews have always been a club of strong values. We believe in giving all kids a chance to play football and to do it the way it was intended, with fair play and respect. The club has recently been acknowledged for their achievements last season by winning not one, not two, but three fair play awards from the Portsmouth Youth Football League. The three awards were; the U10 Award to our U11s White’s team managed by Jodie Cutting, Under 13 Award to our U13 Red’s team managed by Dean Smith and finally the club were awarded the prestigious 11-a-side Fair Play Shield, which is given to the club who has the best overall fair play rating of all of 11-a-side football.