The Hayling Island Pool League has been running for many years now. At it’s peak, there were two divisions but the closure of a number of venues due to the ever changing economic climate drastically reduced the number of venues available to host teams; currently two pubs host two teams and one, the West Town Shady Potters are now at their third venue (hence their name)!

In the league, teams compete against each other three times over the course of a season, with each league match consisting of three doubles and six singles matches of one frame. The league prides itself on being a friendly one, something to break up the monotony of a winter’s evening for the inhabitants of this tranquil little island on the south coast. There are also team and individual cup competitions including, this season, the introduction of a new cup competition (the Rainbow Cup) in memoriam to the league’s former chairman who, sadly, died last year. 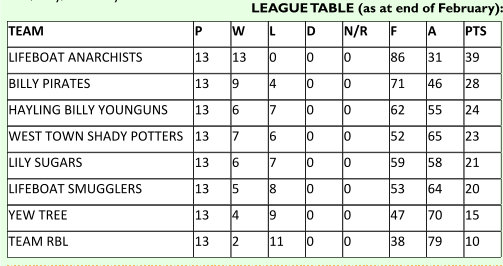