Havant Hockey Clubâ€™s menâ€™s 1st X1 had a busy pre-season prior to commencing their South Premier Division 1 season on 3 October. 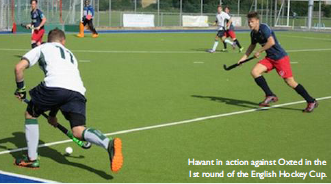 Havant play two home South Premier Division 1 games at Havant College during October. First up on the 3rd October was Old Cranleighans - the team that finished one place and 12 points behind third placed Havant at the end of the 2014/15 season. This encounter with Old Cranleighans was never going to be easy game. At the final whistle however it was a comfortable 6 â€“ 2 win for Havant. Indian International Sandeep Singh pitched in with four goals all from penalty corners. Singh also scored four in Havantâ€™s 8 â€“ 2 win at Staines on 10 October.

Havantâ€™s opponents at Havant College on Saturday 17 October, Banbury, were promoted as Champions of South Premier Division 2 at the end of last season.

On the player front 1st team coach Ady Adams told me immediately after the final match of the 2014/15 season that he was generally happy with the squad he had and speaking of the 2015/16 season he said â€œI will continue bringing young players through on the lines of putting a team together with a mixture of young and experienced players.â€ Accordingly he has retained the services of international players Sandeep Singh (India) and Maciej Janiszewski (Poland) for the 2015/16 season. They are back at the Club and both scored in the English Hockey Cup 1st round match with Oxted. Singh scored with a signature short corner drag-flick, while Janiszewski scored an opening hattrick. With Adams having the services of these two experienced international players to compliment the existing talented young and experienced players, the Club has made a strong start to their South Premier Division 1 campaign.