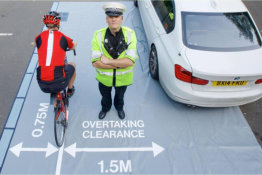 Q    I need to use the road to get around. Are there any special points I need to watch out for ?

A    There are several points buried in your question.

First a bicycle is legally a road vehicle which carries both rights and duties.

The Highway Code makes it clear that we must not cycle on footpaths but also gives advice on using cycle tracks and shared paths as an alternative, although they don't very often go from where we are to where we need to be.

So, we can, and should ride in the road.

It is almost physically impossible to ride in a dead straight line, and the edges of the road often seem to have the most potholes, rubbish, drains etc. to avoid.

If we ride too close to the edge we risk bumping into a raised kerb, or running off the tarmac into grass or a drop off the tarmac, either of which can make the bike unsteady or tumble.

This is not to say that the roads are dangerous, just that we should ride about two feet away from the edge and avoid those hazards if we can.

The Highway Code  doesn't only make rules for cyclists but for pedestrians, horse riders, motor cyclists and motorists as well, so when we are cycling on the road we need to follow the same rules.

As long as we know the traffic signs they usually tell us where we can cycle on proper paths, and we should always keep left unless a sign tells us otherwise.

Generally, everyone should take care when passing pedestrians, especially children, older or disabled people and allow plenty of room. It can be alarming, as a pedestrian, to unexpectedly have a silent bicycle swoop past as you walk along.

But its not all about what cyclist should do. Other road users have a duty to us, as well.

Rule 163 of the Code  tells motorists to give cyclists and others at least as much room as they would when overtaking a car.

The Police know that close passing is the biggest worry for people taking to their bikes, so many police forces are using a roll-out mat showing the recommended distances, to educate drivers found passing too close to cyclists.

The picture shows a cyclist riding correctly about two feet six inches from the kerb ( 0.75M) and the space which motorists should allow when passing, five feet (1.5M ) That is much more precise than the Code's “... as much room...”.

Most motorists, of course, allow plenty of space, and often hang back behind a cyclist until there is room to pass safely, so provided we keep out of the gutter to stop ourselves falling off and obey the rules we should be safe enough on the road.