Q  I seem to either get shouted at or ignored if I use a cycle bell. Is there any guidance available?

A  Firstly, there is the law. A bicycle has to be fitted with a bell before sale. But the law doesn't say how loud the bell has to be nor does it say when you have to use it.

The Highway Code says we should all be considerate to other road users, and to let them know you are there when necessary, for example by ringing your bell or other 'audible warning' – a horn or the  human voice would do. 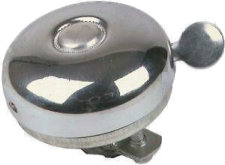 So, it is recommended that you fit a bell to your cycle for alerting pedestrians or other cyclists

Manufacturers often fit the simplest bell just to comply with these requirements, but a simple dome with a thumb operated spring lever just goes 'Ting' and can sound like a bit of background noise.

I was riding a shared path round Farlington Marshes and saw a man ahead looking at the birds. I 'dinged' and he didn't react, so I dinged again as I got nearer and he started looking at the ground to see what he had dropped.

Since then I have fitted either a traditional bell that goes 'Brrrring' or on  my other bike a new 'two tone' bell that goes 'ding-dong' like the old 'Avon Calling' advertisements. This usually makes people smile.

As the highway code says, all road users should be considerate to each other, and that applies to shared cycle and pedestrian paths, as well as roads.

On a bike, or off it, we can all be preoccupied and not listening out, particularly if we are in conversation. Two or three people walking along together are probably talking, as well as being spread out a bit so it is courteous to let them know there is a bike coming up behind them.

If you ring your bell too far away, they may not hear it or take notice, and if you wait until you are almost upon them a bike bell ringing in their ear can be startling, so a compromise is needed. I prefer to give an early warning ring at what I think is a suitable distance, and if there is no reaction, to ring again as I get nearer, perhaps a double ring to try to cut through the awareness of the other person, cyclists as well as walkers. Generally one of a group will half turn and budge the others slightly to one side. Sometimes they will stand still at one side of the path, and sometimes they will reel their dog in from its extending lead.

Either way I thank them as I pass.

Sometimes a bike bell is ignored, for whatever reason so you can call out. Something like 'Bike coming through' but try to sound friendly and not aggressive and don't wait until you are immediately behind, and startle someone. Then it would be your turn to get shouted at.