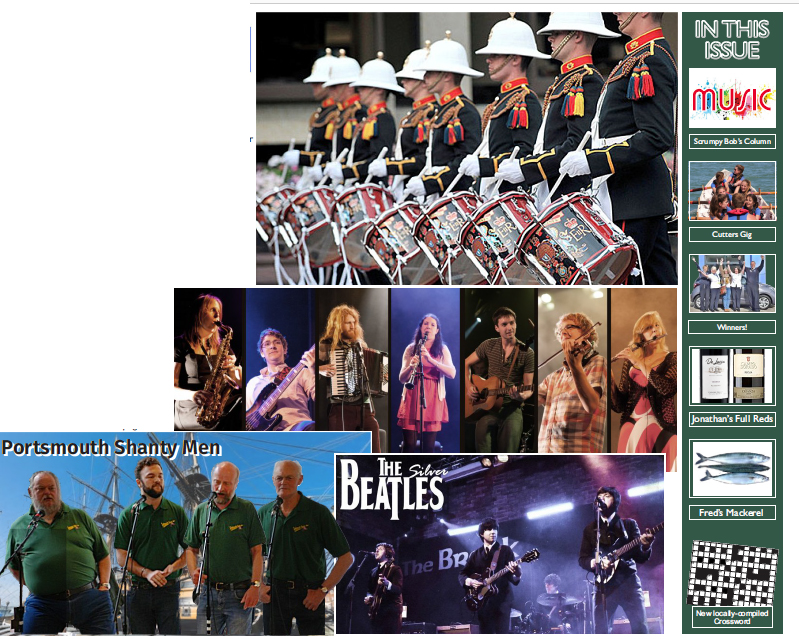 Waterlooville Music Festival 2018 takes place from 9th to 17th June, with free lunchtime events and six evening concerts. Founded in 2006, the festival is well established as the highlight of the Waterlooville calendar when the town becomes the entertainment capital of Hampshire!

Sunday 10th June: the opportunity to sing your heart out! With two Royal Weddings taking place this year, the programme is featuring hymns from the Royal Weddings, performed by one of the oldest and well known corps bands within the Salvation Army – The Portsmouth Citadel Band. A rare opportunity to enjoy this wonderfully talented band performing in concert.

The Band of Her Majesty’s Royal Marines School of Music will be at the festival on Tuesday 13th June, under the direction of Major Pete Curtis. This select group of highly talented musicians are required to achieve the highest standard of excellence and this will be a thrilling evening of stunning and varied band music performed by the training wing of the most famous and highly respected military band in the world.

The successful BBC TV programme “The Choir” led to the formation of five “Military Wives” choirs which together in March 2012 released an Album “In My Dreams”. The album shot to the number one slot in the UK charts within a week. Portsmouth Military Wives Choir was one of these five founder Military Wives choirs, of which there are now around 70 throughout the country. Over the years the Choir has performed at many high profile events, including the 2015 D-Day celebrations at the Royal Albert Hall, and some regular venues include The Kings Theatre, Southsea, Worthing Assembly Hall, Romsey Abbey and Guildford Cathedral. Performances have included television and radio appearances. And on Wednesday 13th June they will be performing at the Waterlooville Music Festival.

Folk and Ale Night is on Thursday 14th June, a fabulous double bill with an all out musical bombardment from “Threepenny Bit”, some of the finest jazz and classical musicians in Hampshire let loose in the world of folk music! They are joined by one of the UK’s finest shanty crews, “Portsmouth Shantymen”.

Party Night on Friday 15th June is really special – featuring dancing to one of the UK’s top Beatles Tribute Bands, “The Silver Beatles”. Conjuring all the magical mystery contained within the music of Lennon, McCartney, Harrison and Starr, their specially tailored suits and psychedelic finery bring all the monochrome and colour of the 1960’s to the Waterlooville Music Festival.

The long history of ‘The Silver Beatles’ has seen them work with ‘The Quarrymen’ (the Skiffle group John founded in the late fifties/early sixties), Allan Williams (The Beatles’ original manager), Pete Best (their original drummer), Alastair Taylor (Brian Epstein’s right hand man) and Cynthia Lennon, who has gone on record to say that ‘The Silver Beatles’ are ‘look alike, sound alike and even think alike - it’s uncanny!’

Having appeared at Liverpool’s famous ‘Cavern Club’, headlined the BBC’s ‘Children in Need’ marathon and played to the likes of Madonna, Blur and Robbie Williams at the ‘MTV’ awards in Milan, popular music magazine ‘Mojo’ voted ‘The Silver Beatles’ as ranking second amongst the most popular Beatles tribute bands in the world, an accolade they richly deserve.”

The festival concludes with the usual Grand Finale: Waterlooville’s version of “Last Night of the Proms” with the Meridian Wind Band directed by Don Lloyd. All the atmosphere, pomp, ceremony and flag waving of the real thing! An evening not to be missed.

Much more information about the festival events, and purchase of tickets at the website www.waterloovillemusicfestival.org.uk