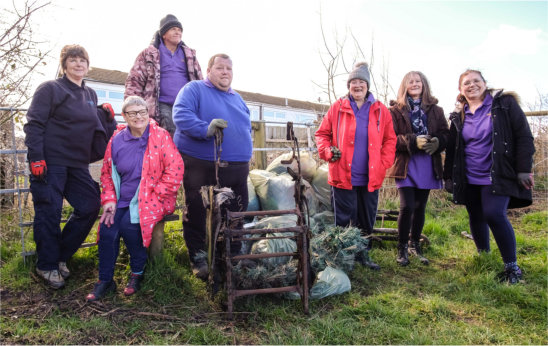 Community volunteers from Leigh Park in Havant have helped complete tree planting to create a new memorial woodland locally.   Members of the Positive Pathways team joined forces with staff from Portsmouth Water in March to clear litter and plant the last batch of more than three thousand trees on part of the proposed site for the new Havant Thicket Reservoir.   The new woodland that’s been established, in collaboration with Havant Borough Council, will give people a place for quiet reflection and to enjoy being outdoors. It will also benefit local wildlife by providing birds and animals with a new habitat for the years ahead.   Positive Pathways, which is run by Community First, is a project to help people gain confidence and develop skills through team volunteering.   Beverley Palmer, Positive Pathways Project Assistant, said: "On arrival we were updated on Portsmouth Water’s plans for the site, which was really interesting.  We then spent time clearing litter from one of the areas running alongside the site and were amazed by the amount of rubbish that people had dumped there - a Christmas tree and a car seat were just a couple of the items we cleared!  After a break, we moved on to planting 70 hazel saplings for the new woodland.  The volunteers thoroughly enjoyed the activity and loved learning a new skill.  Not even a hailstone shower could put them off achieving their goal!"   Portsmouth Water Environment & Biodiversity Specialist Tracey Viney said: “It was great to work with the Positive Pathways team to finish off the planting for the new woodland, which is part of our overall Havant Thicket Reservoir project. The thousands of new trees that have been planted since January will now grow to create an enhanced green space for people to enjoy, plus they’ll help birds and mammals, such as dormice and bats, to move around and feed more easily by providing connection between other areas of woodland nearby and further afield.   The proposed Havant Thicket Reservoir site is owned by Portsmouth Water and is currently mainly made up of grazed grassland, with small areas of trees. It’s open to the public to walk in, watch birds and explore, via a network of paths.

The company has included a proposal to build a reservoir on the site in its future plans to increase the resilience of water supplies in the water-stressed South East and provide new wetland wildlife habitats and community and leisure facilities. By planting now, the woodland has time to become established and provide habitats before any steps are taken to progress the reservoir."