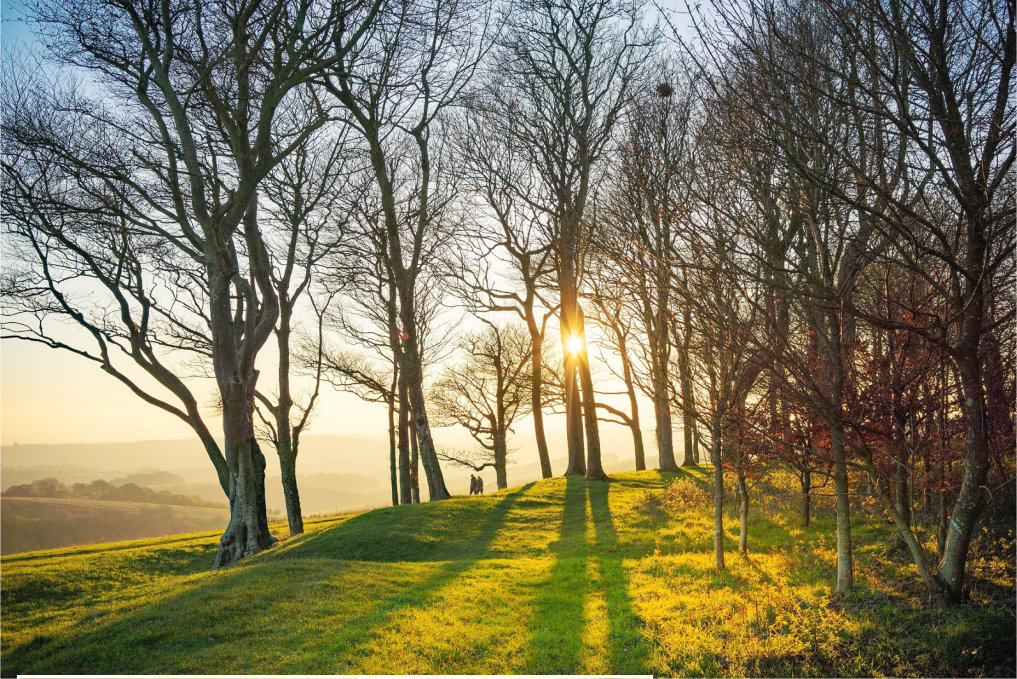 The stunningly serene picture right of walkers on a sunny winter’s day is the winner of the South Downs National Park’s Annual Photo Competition.

“Chanctonbury Ring” by Tim Kahane below, took the top spot in the popular photography contest, which attracted over 400 entries: a record-breaking number for the competition.

The theme for this year was “My Tranquil Haven” and judges agreed that Tim’s peaceful photograph met the brief perfectly, capturing a moment of serenity amid the uncertainty of 2020.

Meanwhile, the competition also included a separate category for best wildlife image – with first place going to an extraordinary photograph of a hare sprinting across a snowy field in the South Downs - below right.

The competition judges were award-winning photographers Finn Hopson, Carlotta Luke and Rachael Talibart, as well as Nick Heasman, Countryside Policy Manager for the South Downs National Park Authority, and Doug Jones, SDNPA Member,
Of the winning image, Rachael said: “I really like the look of trees in winter and there’s a soft light hitting some of these trees that I find very pleasing to the eye. The trees create the effect of this being a safe haven and I love that.”

Nick said: “This is the epitome of a tranquil haven. Chanctonbury Ring is an amazing place, shrouded in history and folklore and a real beacon on the South Downs. This image captures its magical beauty exceptionally well.”

Carlotta added: “I would like to be right there – it just feels so peaceful.”

Photographer Tim, who hails from West Chiltington in West Sussex and receives a £250 prize, said: “I grew up in the shadow of the South Downs and their contour has been the backdrop to my life. Every day the school bus would follow their line and every day Chanctonbury Ring would dominate the skyline. This emphatic grouping of trees high on a scarp hillside and alone in their mythical company remains an iconic landmark in my life.

“The Downlands are a constant source of inspiration. My photograph of Chanctonbury Ring on a winter’s afternoon is an essence of my relationship with those memories and the landscape. A fraction of a second in 80 million years of evolution.”

Finn said: “I’ve seen a hare once on the Downs and it was fantastic. To capture this moment of a hare in full sprinting mode is very impressive.”

Carlotta added: “The hare is caught off the ground, obviously running really fast and its face is looking right at the photographer. I love seeing the snowflakes suspended in the air. You get a sense for how fast the hare is.”

Photographer Richard, who hails from Waterloville in Hampshire and wins £100, said: “I visited this location on numerous occasions to photograph local hares and formed a good understanding of their movements in the area. On the morning I took the photograph the landscape was transformed by a light dusting of snow and I sat still for well over an hour in a field verge with the snow falling around me. I was frozen and about to give up when my patience was rewarded as a drove of hares appeared across the field in front of me.

ooking through my camera's viewfinder and seeing these majestic animals in the falling snow sprinting towards me was an unforgettable experience.

“I feel incredibly privileged to live so close to the South Downs National Park and to have access to such a wide variety of beautiful landscapes and animals to photograph in the area. To have won the wildlife category of the South Downs Photography Competition is a surprise and huge honour.”

All the winning and commended images, as well as 13 other shortlisted images, will now be put forward to the People’s Choice. People will be able to vote online from Thursday, 7 January for their favourite photograph and the winning photographer will receive £100. The online poll closes at midnight on 31 January.

Visit www.southdowns.gov.uk to cast your vote.