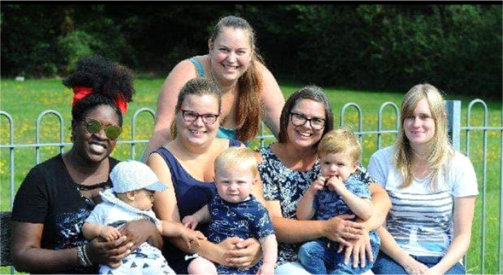 MORE than 1,000 mums are tackling anxiety and isolation as part of a supportive new Facebook community.

When Gosport mum Tuesday McEwan had her third child 15 months ago, she began to suffer with anxiety for the first time in her life.

After feeling like a prisoner in her own home, Tuesday decided she wanted to change that and help other mums feeling the same way.

In May, Mums Unite was born – a Facebook group for mums to share their feelings, meet new friends and join group discussions as well as take part in weekly meet-ups.

Fast-forward three months and the group has more than 1,000 members across the south coast, stretching as far as London and Wales.

‘We hear so many positive things that getting out and about is helping them. That’s what keeps my passion alive.’

Local groups are run by volunteers, with the Gosport walk and talk becoming a popular event organised by the admins. Other groups in the area include Portsmouth, Waterlooville, Havant and Chichester.

On having mums volunteer for the group, Tuesday said: ‘It is mums filling their time which I think is important. Everyone who's joined the team has said how much it’s helped them, it’s made them feel able to meet other mums.

‘We have got so many ideas from the mums, so much enthusiasm. I’ve met really lovely mums, it’s lovely to see people stepping out of their comfort zone.’

Working around the clock to make sure everyone is interacting positively, Tuesday thinks the hard work is worth it when she sees her son, Sawyer, playing with other children and improving his own confidence.

The group aims to fill gaps created by cuts to resources, making sure there are activities for parents to enjoy with their children as well as tackling issues of anxiety and isolation.

Tuesday said: ‘In the world we live in today where it’s so difficult for people and mums to get out of the house, interaction with people even if it’s over a screen must be good.’ To join the group search ‘Mum's Unite’on Facebook under the groups section.