Sunday Fun In The Sun!

Purbrook Horticultural Society held their Annual Spring show on March 24th and normally that day heralds snow, rain and/or Hurricane force winds but, not this year! We awoke to beautiful bright sunshine, with a temperatures normally associated with May or June, meaning that the Deverell Hall in Purbrook was filled with the heady perfume of Spring blooms looking even more colourful. Enjoyment of the exhibits was further enhanced by the wonderful home made Cakes and Preserves served with cups of Tea with friends and the added temptation to purchase just a little extra to sample at home. The quality of exhibits on show kept the judges busy, trying to decide what Blooms had the edge, therefore deserving of the prizes while encouraging the newer exhibitors with positive feedback.

A date for you diary – The Purbrook Horticultural Society Summer Show is to be held on Sunday 18th August at Crookhorn College, Stakes Hill Road Waterlooville. Schedules are available now and further details at: www.purbrookhorticulturalsociety.org.uk We look forward to seeing you! 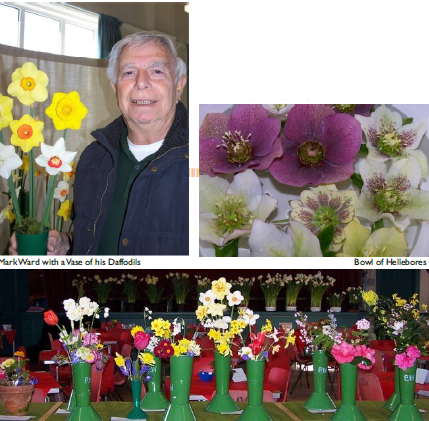