John Sawtell is retiring from his post as a Governor of St Alban’s Primary School in Havant. He started his work there before 1992 so he has certainly given silver service to the school over a quarter of a century.

At his final assembly with the children he said how much he had enjoyed being part of St Alban’s. He told them: ‘I shall be sorry not to see you all so frequently but I have enjoyed being a Governor here very much indeed and I’ve seen many changes. You have teachers who care very deeply about your education and it has been a pleasure to see so many of you grow up and move on in life.‘

John wished the staff and pupils at St Alban’s all the best for the future. Asked about the role of Governor He said: ‘I encourage others to come forward and volunteer to become Governors. It is immensely rewarding and I have learned so much over the years. The training is excellent and other Governors are supportive and helpful. You become an integral part of the school and help influence how it develops and moves forward.’

The Head Teacher at St Alban’s, Mrs Nicola Hordell, said that John would be much missed. She added: “John has been dedicated to the work of the school. He has brought his wisdom and understanding to the organisation and has championed education for those children with Special Needs. Our Governors are a supportive team and they will miss John too. I appeal to those who have a little spare time to volunteer as Governors. It is increasingly difficult to find people who are happy to share in helping run a school. It’s a challenge but very fulfilling. I am always willing to speak to anyone who is considering becoming a Governor.”

John said he would miss his contact with the school but he has a mass of happy memories associated with his work as a Governor. 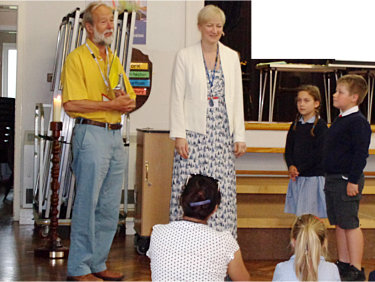 Photo left - John Sawtell with head teacher Nicola Hordell and pupils of St Alban’s school, Havant, at the assembly when he said his farewells to everyone.