Cllr Ken Smith was pleased to use his councillors’ community fund together with match funding from Postcode Publications to buy materials for a new Bedhampton village sign and for HAMESH Men’s Shed to create a new sign to replace the previous sign which had rotted away.

Ken said that residents are very pleased with the new sign which gives a sense of identity to Bedhampton village.

Look closely at the sign when you next pass by and see the local scenes depicted on it include the ‘Spitfire’ bridge over the A3M. Going up - Our sincere thanks go to Stewart Burns and the guys at HAMESH Men's Shed above who built the new sign from scratch, and to Peter Vince and his team at Norse South East who removed the old sign and erected the new one. 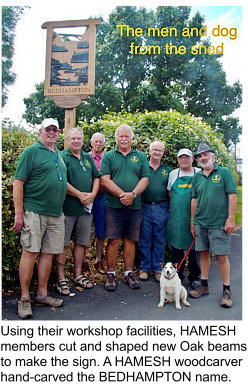