Three and a half years ago the Rowlands Castle Heritage Centre, purchased the Iconic Railway Model built by Peter Goss, a renowned Model builder, who only constructs models with a Military theme and a Railway of course. The Model shows how the Village looked in May 1944 during the build up to D-Day, accurate in every detail, including the military equipment which was stored in and around the village, the Camp in the Forest, the Local Shops at the time. 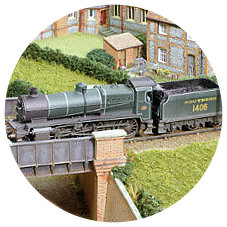 For the last three years the Model had been on display up at Stansted House, during the summer months when it was open to the public, we had visitors from thirteen different countries (Australia, Canada, N.China, Colombia, Cyprus, Germany, Hungary, Philippines, Portugal, Russia, Spain, Sweden & USA (Florida,California, Maryland & New Mexico), Scotland, Wales & Eire.

Over the three years we had in excess of 13,000 visitors, were open 291 days (never missed a session whilst the House was open) and had 32 volunteers most of whom did all three years.  all fascinated by the detail on display and the story that went with it, of that time.

There are still some residents who can recall the Troops being in the village, and what life was like at that time in our history.

This year unfortunately we are not able to have the model on display in Stansted House, the room we had being put to use as a Family History Room depicting its role in the 19th Century.

But we will have it on display on the 8th of May, Bank Holiday Friday, as the Village puts on a VE (Victory in Europe) Celebration. It will be in the Church on the Green, along with displays of photos and other scenes from May 1945 depicting the joy of, at least one war front ending, with the war against Japan in the Far East, still to raging until August 14th.

There will a full day of events from 11.00am until late, short Service of thanksgiving, a picnic on the Green, the Blendworth Silver Band, the local Baton Twirlers Maypole dancing, BBQ, Cream Teas, the displays in the Church, an evening event in the Robin Hood, plus others at the Fountain & the Castle Inn pubs.

After that we will display at the Village Fair the first Saturday of July, an event which attracts visitors from all around our area. So, we are looking for a more ‘permanent home’, plans are being investigated as where this could be, as it is in fact owned by the Village we want it to remain in the Village, saved for future generations, as a reminder of the sacrifice made by some many in keep the Country in winning WW2. Further detail at: www.rowlandscastle.com or   www.rowlandscastleheritagecentre.org.uk