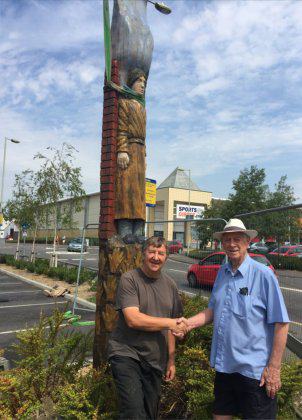 Alan Westbrook from Postcode Publications welcomed the new Totem Poles created by Robert Koenig as they were erected recently by Hargreaves - the owners of the Solent Retail Park in Solent Road, Havant.

The Totems tell the story about local leather glove production which formally occupied the site. 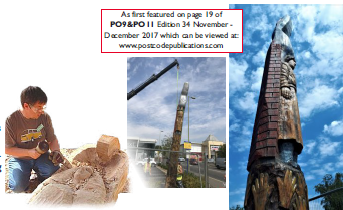 The Totems were joint funded by Hargreaves and Postcode Publications continuing the public art theme started by two totems provided by Tesco Extra as part of their redevelopment in Solent Road.

Long sought after public bench seating in the Solent Retail Park was also placed by Hargreaves.

The two beautifully carved original totem poles standing outside the Tesco Extra store in Solent Road, Havant, represent the transition from the trades and skills of the old town to the extended town centre and new retail developments there.

Robert Koenig the renowned artist of international acclaim who designed and hand carved the totems, has now created two more at the entrance to Solent Retail Park phase two, off School Lane.

Commissioned by Postcode Publications and match funded by Hargreaves the developer of Solent Retail Park, the totems further progress the story of Havant old progressing to Havant new.

One totem depicts a Ferrari on a ‘pathway to heaven’ depicting the passion for Ferraris and immense achievements of Neville Andrew - Hargreaves Chairman who sadly passed away before completion of the development.

The new 15ft high creations were carved and painted from selected Oak trees, with an additional 4ft concreted into the ground for stabilisation.

The original totems outside Tesco have the following storyline: "A carved family group occupies the top sections of each pole. On the 1st pole a woman/mother dressed in clothes from the early part of the 20 century has a young contemporary boy sitting on her shoulders. On the 2nd pole a contemporary man/father has a young girl dressed in clothes from the early part of the 20th century (including a hat) sitting on his shoulders. In this way people from Havant's past and present are linked together. Old photos from Havant's past were used as a source of inspiration for the mother and young girl figures. The figures on top of the totems are 13ft from the ground and can be seen from a distance away. They stand high, proudly representing their town and its history. Other images are carved along the length of the poles are: the spring, the wheel from the Havant water mill, animal skin being prepared for parchment making, a train, hop leaves at the base of the Havant Gazebo and two Roman shields on the walls of the Gazebo. The totems were coloured using a top quality translucent wood protector".

On top of the male totem is a carved head of a sheep with reference to historical Parchment making to the old town made from the skins of sheep, goats and calves. Sheep skins were sent to Havant from all over the Downs. At one point in the carving the sheep fur will mingle with the leaves lower down.

On the top of the female totem is a carved Ferrari driving off into the heavens. The lower section is covered with a network of gloves referencing another historic trade carried out in the old town.