How a semi-literate mudlark’s curiosity, luck, and energy led him to a stunning discovery 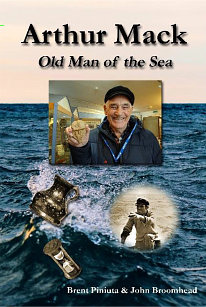 Excavation of this revolutionary eighteenth century warship wreck changed our understanding of maritime technology development. And four thousand miles away the news planted a seed that grew into this book.

Luck comes to those who see life’s chances and take them.

Still, it would have taken a psychic bystander to see a future respected amateur archaeologist in a ragged child scrabbling for thrown coins in the mud of Portsmouth Harbour.

The young man supplemented his income by bait digging, and along the way found the detritus of centuries.

Some of it turned out to be interesting and valuable.

As he grew up, Arthur learnt to haul a living from the treacherous waters of the Solent. One day in May 1979 his net snagged on a seabed obstruction. When eventually freed it came up with a piece of old timber . Instead of cursing his luck and throwing it back he trusted his feeling about it, noted the spot, and returned with John Broomhead, a diving friend.

The timber turned out to be part of the Royal Navy’s first Invincible, a landmark in warship development.

This book is the fascinating saga of Arthur’s life his archaeological adventures, and the Invincible exploration.

The story of the book is almost as curious. Brent’s fascination with the wreck brought him across the Atlantic to meet the people involved and inspired him to learn to dive so he could visit the site in person. He and John Broomhead developed the text together, passing drafts between them in a socially very distanced team.

By
Brent Piniuta and John Broomhead