Escaping to the 1950s a perfect antidote to the turbulent Covid times for Hayling crime author, Pauline Rowson 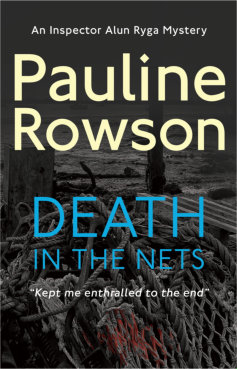 Escaping to the 1950s was a perfect antidote to the turbulent Covid times for Hayling Island crime author, Pauline Rowson as she wrote the third Inspector Ryga mystery, DEATH IN THE NETS, which available now.

DEATH IN THE NETS is set in January 1951 in the small fishing town of Brixham in Devon where the body of a man stabbed through the heart is found tangled up in fishing nets. After a series of startling revelations, Scotland Yard's Inspector Ryga is tasked to discover why the dead man who left the town eleven years ago has returned and why someone hated him enough to murder him.

Pauline says, ‘While it was great to take refuge in 1951 and escape all the news on Covid, it wasn’t exactly a picnic back then. Housing was in dire supply with people living in Nissan huts on disused airfields and abandoned army camps, in converted torpedo boats, old houseboats, railway carriages and shacks. There was still rationing on some foodstuffs, an acute shortage of many consumer goods, make-do-and mend was still very much the order of the day and black marketeers flourished.  Added to that there was war in Korea, National Service and the cloud of nuclear war hanging over everyone. Life was pretty tough for many including my fictional sleuth, Inspector Ryga.’