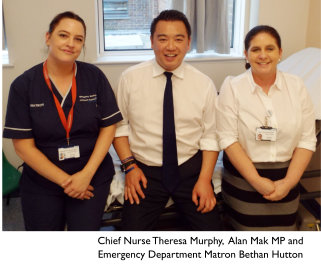 Local MP Alan Mak has backed the plans for a new emergency department at Queen Alexandra Hospital (QA), writing to the Health Secretary Matt Hancock in support of the bid.

It comes after Alan recently met with QA Chief Executive Mark Cubbon to discuss the planned development and meet with some of the doctors and nurses at the hospital.

In his letter, the MP stresses that the emergency department at QA now sees up to 400 patients a day, up a third from 2010.

He said: “The number of patients using the emergency department at QA has substantially increased in recent years and means that it is now operating at a level for which it was never designed.

“Having met some of the hard-working A&E staff, I believe this extra investment will give doctors and nurses the resources they need to deliver first class care. I am fully supportive of the plans and will be lobbying hard in Westminster to make sure that the bid is successful.”

Alan also welcomed the recent investment into the NHS during its 70th anniversary year, having released a think-tank report earlier this year calling for a digitalised health service.

He added: “As an MP who has made ensuring constituents have access to high quality healthcare a priority, I welcome the extra £20billion in funding that the Government has committed to the NHS by 2024. That builds on the investment at QA Hospital which means there are 157 more doctors and an extra 145 nurses since 2010. The extra money will mean that the NHS is in a strong shape as it starts its next 70 years.”