Haines Boatyard, nestled on the foreshore at Itchenor, is well known for its highly skilled wooden keelboat and GRP dinghy repair and boatyard services. Recently the company has been undertaking some more unusual work in renovating and maintaining wooden and GRP rowing boats.

The full range of skills and experience of the in-house shipwrights have been engaged in the renovation of a Solent Galley. Originally built for racing in Portsmouth Harbour and its environs, the Solent Galley is a 30ft long, clinker-built, fixed seat rowing boat with 4 oars and a cox. They are light, slim and fast and have some notable achievements to their names including holding the record for the circumnavigation of the Isle of Wight.

Southsea resident, the late Pat Sherwin was passionate in his wish to preserve the few remaining examples of these boats and established the Pat Sherwin Rowing Trust, who own and operate a number of galleys, some of which are lent to local organisations to encourage recreational rowing.

The growth in recreational, as opposed to racing, rowing has been considerable and this was recognised by Pat Sherwin being awarded an MBE for his efforts in ‘encouraging recreational rowing.’

Solent Galley, ‘Bembridge’, arrived at Itchenor Sailing Club in late 2016 from Langstone Cutters Rowing Club where she had participated in the Thames Diamond Jubilee Pageant in 2012 and a number of Great River Races. Bembridge and her sister boat, Sallyport, have been rowed across the Channel from Cherbourg to Portsmouth and Ouistreham and Caen to Portsmouth! Bembridge was built in 1960 by George Feltham of Old Portsmouth. 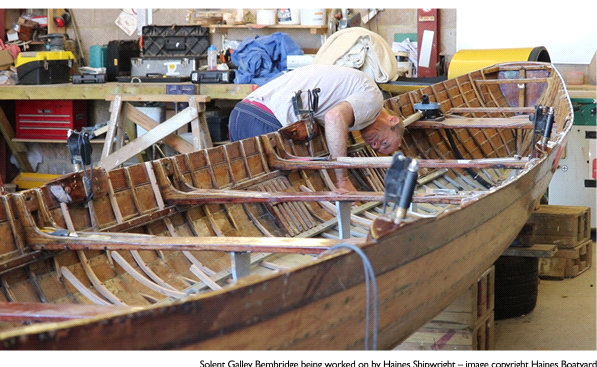 ‘Iccanore’, a new GRP Celtic long boat arrived at Itchenor in June 2018 to substitute for ‘Bembridge’ while she went through a major refurbishment in July and August that involved the replacement of 24 wooden ribs by the shipwrights at Haines Boatyard. The Celtic Longboat was chosen as its rowing characteristics are very close to those of a Solent Galley and allowed the very popular Chichester Harbour outings to continue uninterrupted.

With a steady growth in the popularity of rowing and frequent outings from Itchenor Sailing Club, both craft require regular maintenance, upkeep and repairs. The highly skilled shipwrights at Haines Boatyard have been advising and assisting the volunteer rowers in the skills of wood preparation, steam bent timbers, varnishing and GRP repairs to keep both craft in tip-top condition.

The qualified yacht surveyor at Haines boatyard ensures that both craft are regularly checked and overseen to keep them on the water for the weekly, year-round rowing outings on Chichester Harbour. Such is the popularity of the rowing that there is talk of a new generation of brand new Solent Galleys being built in wood; that should keep the Haines shipwrights and volunteers busy for a few months!