Local Based Dainty Goes to France 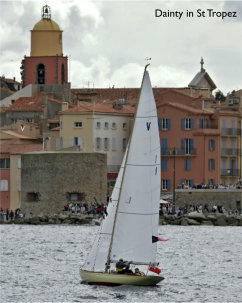 Regates Royales takes place in Cannes each September, and is hosted by the City of Cannes and organised by the Yacht Club de Cannes. The event sees the gathering of around 150 of the world’s greatest classic yachts, including a number of ‘grand dames’ such as Elena of London, Cambria, Sunshine, Moonbeam and Mariska often gracing the bay. The event guarantees tight, competitive racing on the water followed by the friendliest of evening soirees ashore as the yachts moor alongside each other on quay in the old port!

According to the rules, yachts under 10m were not strictly allowed to participate but the event organisers were so taken with commitment and loyalty of keelboats such as Dainty that they created a ‘Classe Invité’ so they could continue to compete! Being so small, at just 8.2m, means that Dainty is one of the few yachts taking part that has no engine.