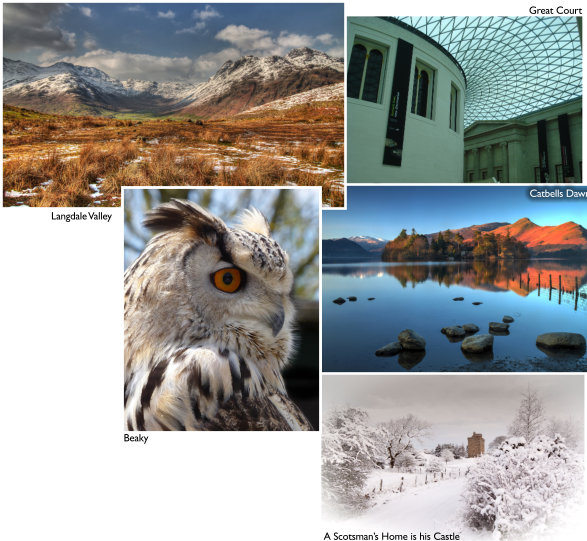 The  last few weeks at Hayling Island Camera Club have been busy with the last rounds of the internal competitions in both the projected digital image league and the print league.  The scores from the fourth rounds in each of these will help finalise members’ final league positions for each of the three categories, Beginners, Intermediate and Advanced and will be used to help determine movement between the categories – up and down!

Results in the fourth and final round of the Projected Digital Image League were:
Preliminary: Elaine Redknap with ‘Great Court’
Intermediate: Mike Inglis with ‘A Scotsman’s Home is his Castle’
Advanced: Gary Kenmir with ‘Catbells Dawn’

Winner of the Projected Digital Image of the Evening was Mike Inglis.  Mike joined Hayling Island Camera Club this season and says he was somewhat overwhelmed by the lovely comments he received from club members after the judging.  “It made me realise what a friendly club we have” he said – “I’m glad I joined”. When he reviewed his image afterwards, he saw that he had actually taken ‘A Scotsman’s Home is his Castle’ in December, 2009 on his Canon 300D.  “I’d always wanted to improve it” he said, “And joining the club has given me the skills to do just that!”

Results in the fourth and final round of the Print League were:
Preliminary: Nic Charrett with ‘Beaky’
Intermediate: Mike Inglis with ‘A Scotsman’s Home is his Castle’
Advanced: Gary Kenmir with Langdale Valley

Winner of the Print of the Evening was Gary Kenmir with one of his own personal favourite landscapes.  “It has colour, snow, nice clouds, decent composition – and it is sharp!”  Gary has quite a reputation amongst club members for the quality of his landscapes.  When asked, he says “If I were to give only one piece of advice about photographing the Lake District, it would be to avoid summer when everything is green and there are countless visitors.  Choose the right times in autumn, winter and spring and you will be rewarded with a far greater palette – and you only share it with a few walkers!”

The next few weeks at the club will see a couple of special internal club competitions, two inter-club competitions and the Annual General Meeting.  A couple of photographic outings during the summer months are already arranged and others are in the pipeline.  The club does not ‘finish’ at the end of the season!