Grind out the honey fungus in your garden

Honey fungus, also known as Armillaria Mella, is a highly destructive disease in the gardens of the UK. Honey fungus spreads through the roots and soil, killing perennial plants and then decaying the dead wood.

How to spot honey fungus 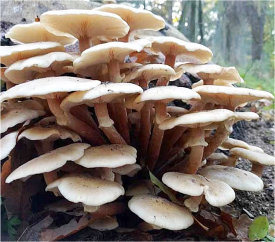 Honey fungus is the common name given to several different species of the fungus  that attack and kill the roots of many woody and perennial plants. The most characteristic symptom of honey fungus is white fungal growth between the bark and wood, usually at ground level. Clumps of honey coloured toadstools sometimes appear briefly on infected stumps in autumn.

Honey fungus can attack many woody and herbaceous perennials. No plants are completely immune, but there are some that are only rarely recorded as being affected. Dead and decaying roots, with sheets of white fungus material (mycelium) between bark and wood, smelling strongly of mushrooms. This can often be detected at the collar region at ground level, and more rarely spreads up the trunk under the bark for about 1m (3¼ft). This is the most characteristic symptom to confirm diagnosis

Upper parts of the plant die. Sometimes suddenly during periods of hot dry weather, indicating failure of the root system; sometimes more gradually with branches dying back over several years. 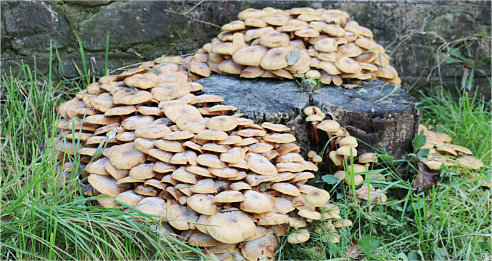 How to control honey fungus
There are no chemicals available for control of honey fungus. If honey fungus is confirmed, the only effective remedy is to excavate and destroy, by burning or landfill, all of the infected root and stump material. This will destroy the food base on which the rhizomorphs feed and they are unable to grow in the soil when detached from infected material.

Preparing for re-planting the area
The most effective way is to leave the area fallow for six to twelve months. This will starve the fungi with no new food source. Also make sure to cultivate regularly to reduce the chance of its survival. Another option is to replant the area with grass but this isn’t as effective and without risks compared to leaving fallow.

When Replanting instead of using trees and shrubs, plant shorter lived plants , but avoid using strawberries and potatoes which are highly susceptible.

By
Kind permission of Country Gardener