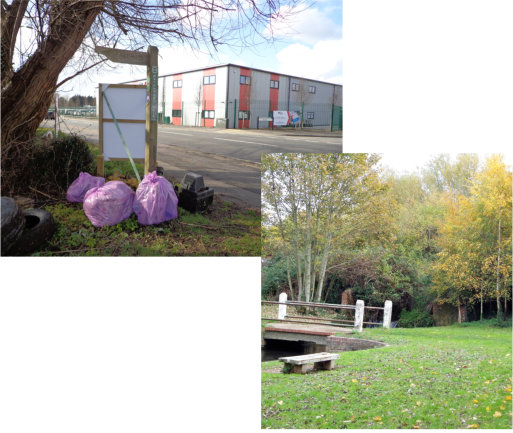 What a difference a year makes...

It was summertime about eighteen months ago and my sister and I were on our Sunday walk along the Solent Way. We reached the site of the old Brockhampton Mill and crossing the little bridge found that due to the lack of maintenance given to the area the bench seat  we knew to be sited overlooking the pond was totally overgrown by nettles. This has been a favourite walk of ours for over forty years and was fondly remembered as a pleasant riverside walk leading to a well maintained open area with plants and shrubs left over from the cottage gardens that existed years ago. It was so sad to see the area spoilt by all the litter and debris that had accumulated in recent times that we decided to act.

Enlisting the help of friends and family, by autumn 2017, The Friends of Brockhampton Millstream had been formed. We approached local councillors for a small start-up grant and after seeking advice began by obtaining the necessary insurance and licences. In early 2018 we were ready to start some serious scything, lopping and clearing of the worst debris from the stream. Meeting every second Tuesday afternoon to work on the site, the open space was returned to an amenity area with bench, the reeds cleared of debris and the nettles and brambles cut back in order to widen the path for improved access. In truth we were amazed at the huge difference that the group’s efforts had made over a relevant short period of time. We have been spurred on to continue the work by the support  we have received from the Borough Council and Norse, volunteers from Pfizer, and all the walkers, runners and cyclists who tell us how pleasant the path is now. Future projects include the refurbishment of the three benches that overlook the stream and the positioning of a board depicting the history of milling at Brockhampton Mill.

riends of Brockhampton Mill is a not for profit group of volunteers and a member of The Conservation Volunteers.