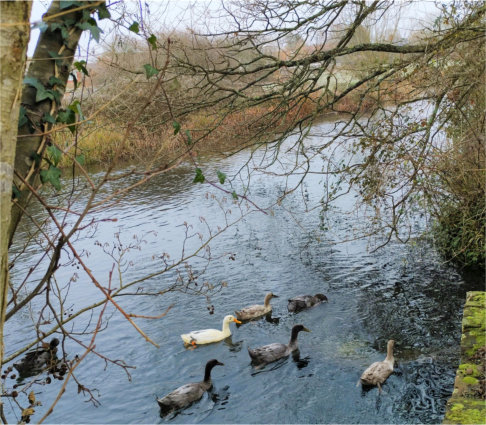 The Friends of the Ems group, formed by people in Westbourne and the surrounding area, has assembled a dossier of evidence to show how the river has been harmed.

The group believes the river is being seriously damaged by the amount of water being removed from its underground sources, and is lobbying Portsmouth Water and the Environment Agency for a reduction. It has been backed by Chichester MP Gillian Keegan and local councillors.

A group spokesperson said: ‘Since we formed back in September we’ve done a lot of research, which has included uncovering past reports, speaking to experts and recording the memories of local people.

‘We’ve gathered a lot of evidence which we believe shows how much the river has deteriorated over the years. It’s now at a very worrying point and action is needed to save it.

‘Having enough water in our taps is of vital importance. But the social and environmental benefits of a fully functioning river are also of immense value.

‘The Ems is a very rare chalk stream, one of only about 200 of its kind on Earth. It’s a vital resource for local people as well as for wildlife. Walkers find beauty and relaxation along its banks. Children play in it, feed the ducks, catch tiddlers and experience nature. It has a huge role in the well-being and mental health of the community.

‘We believe it must be possible to find a way of reducing pressure on the river while maintaining a water supply.’

The group, known as FOTE, says the Ems was healthier and flowed more strongly in the past, before modern-day abstraction (removal of water) by Portsmouth Water.

FOTE says climate change or urbanisation cannot account for this reduction in the strength of the river.