The community of Emsworth once again celebrates St. George’s Day with its annual parade. The residents of Emsworth are rightly proud of their military neighbours on Thorney Island and St George’s Day gives residents and visitors the opportunity to show their gratitude to the men and women of our armed services for their unstinting dedication to duty.

This the eleventh time Emsworth invited soldiers from Thorney Island to celebrate St Georges Day and this year welcome the men and women of 16 Regiment Royal Artillery 11 Battery.

The parade will start at 10.30am on Tuesday 23rd April with Veterans from various conflicts going back more than sixty years marching with 16 Regiment Royal Artillery through Emsworth. Children will also accompany the parade from Thorney Island Primary School, culminating in St Peters’ Square in front of the Mayor of Havant and the Commanding Officer from the 16 Regiment, Thorney Island.

A large crowd is expected to support this real community event. 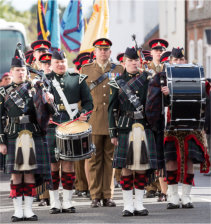