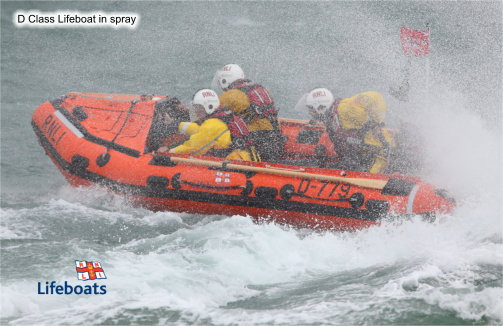 Two fifteen year old boys went swimming close to the Chichester Harbour entrance and were caught in the ebbing tide. A man walking by and the RNLI Lifeboat combined to save them. Then the very next day a group of young men were enjoying an evening stroll across a sandbank at the western end of Hayling Bay when they found themselves out of their depth in a gully near the shore and one of them could not swim.

The two local boys were swimming off Sandy Point and got into trouble in the Chichester Harbour ebb tide at 20:30 on Friday 5 July. With a struggle one made his way ashore. The other one was seen by a local resident who was out walking with his wife. The man decided to enter the water and help and he managed to get the boy ashore. Both the boys were recovered from the beach by the D Class Lifeboat ‘Jacob,’ and taken to the Hayling RNLI Station for the shore crew to care for them. Their medical condition was checked by the volunteer Station Paramedic who together with the shore crew agreed that an ambulance was not required.

Both casualties were given advice as to the need to monitor their own condition over the next 24 hours and also not to swim in the Harbour mouth due to the strong currents, as advised in the notices on that section of the beach. They were then taken by a lifeboat crew member back to an adult relative who was also given advice about monitoring their condition and about the dangers of swimming at the harbour mouth.

On the Saturday a number of people on the shore saw the men go into the gully but at first thought the men were larking about, then they realised that what they were witnessing was a young man drowning. Several concerned members of the public made 999 calls and the Coastguard paged the RNLI Lifeboat for an immediate launch.

The D-Class lifeboat was launched and made speed to the scene. The group of friends had managed to get the casualty ashore but one of the rescuers was also in distress.

The RNLI lifeboat crew carried out their first aid assessments of the two men and found one of them had swallowed a lot of seawater and was slightly hypothermic. They made them comfortable and when the ambulance crew arrived handed them over to be cared for.

One of the members of the public who gave assistance by providing blankets and shelter in his campervan said after the event ‘Luckily everyone lived to tell the tale but it could have easily ended in tragedy. Everyone should respect the water and know your abilities and limits.’

The RNLI would recommend only using Lifeguard protected beaches but on Hayling, without lifeguards, to swim off the beach along the centre of the Island where the currents are less dangerous. If like the young men you find yourself suddenly in deeper water you are likely to suffer cold shock. You should control the urge to gasp as you may swallow sea water, and try to float calmly on your back until you can wave for help or swim to safety.