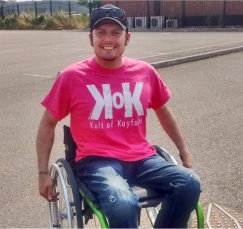 In June and July of this year, three times Havant Borough Sports Association Disabled Sportsperson of the Year David Williamson will be taking on his biggest challenge yet... an epic 30 marathons in 30 days! David will be taking on this most incredible of physical and mental tests to fundraise for three causes very close to his heart.

Three year old Felicity, four year old Emerson and LimbPower (you can read more about the causes below). All funds raised from the 30in30 will be split equally between these three fantastic causes. To support David please visit his Just Giving page: https://www.justgiving.com/fundraising/dw30in30

David had both legs amputated through the knee when he was a few months old, having been born without tibia bones. As well as pushing marathons and being a 5-time participant in the Great South Run he has completed a 24 hour wheelchair push and played over 300 games for South Hants Sitting Volleyball Club. He was the recipient of the 2016 #wecandoit Personal Achievement award.

Three year old Felicity has undiagnosed genetic conditions which the doctors think causes all of the different problems she has. She has three brain conditions, she is visually impaired, she has got reflux, epilepsy and it's quite difficult to control. She has twitches every day that cannot be controlled by medication and needs 24 hour care. David raised over £4,000 for Felicity by completing the 2016 Brighton Marathon, after fighting their longstanding rule that wheelchair athletes must be pushed around the course.

Four year old Emerson developed a cyst on his spine when he was 2, which paralysed from the waist down. He lost all movement in his lower body and is unable to walk. The family work tirelessly to ensure that he keeps smiling through all the surgeries, rehab, travel and consultation that has followed. David was contacted by the family after they had read of his achievements online to thank him for giving them hope for Emerson's future. David responded by giving Emerson one of his awards and continues to stay in close contact with them.

Limb Power was launched in November 2009 to engage amputees and individuals with limb impairments in physical activity, sport and the arts to improve quality of life and to aid lifelong rehabilitation. In July 2014 LimbPower became a National Disability Sports Organisation. Through this association and work with the English Federation of Disability Sport and Sport England LimbPower help amputees and people with limb impairment reach their sporting potential.