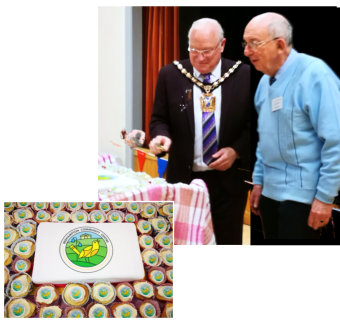 Bedhampton Community Centre celebrated their official launch with a free open day for the community on 18th February. After their transition from social hall to Community Centre, they felt they should party with everyone that makes the centre as special as it is, by throwing a free all day long party, including a free lunch.

The Mayor of Havant, Cllr Peter Wade, came along to officially open the centre by cutting the ribbon and slicing the cake alongside Chairman Mike Sellis. This was after a fun-packed morning of taster sessions, crafts, and free refreshments. The afternoon was filled with showcases of local talent, including Folks in Harmony and a solo set by nine year old local singer Nevaeh.

With three rooms open full of entertainment and workshops, visitors to the centre always had something to keep them occupied. There were competitions for younger guests to complete, including a ‘find the bird’ competition and colouring competition. Both of these linked into the new Bedhampton Community Centre logo, which was designed by local Bedhampton resident Dan McCabe. Dan’s logo won the two-month long competition, which he entered to feel part of his new community after moving here. The design incorporates a fictional Bedhampton Songbird, which sings out to the community, and is made up of mosaic pieces to represent the diversity and inclusivity of the centre. The logo was launched by decorating a large cake and a hundred cupcakes, and can now be seen around the centre on badges, mugs, pens, and will soon be on t-shirts as well.

Bedhampton Community Centre have activities taking place every day of the week for every age, ability and interest, and love to see new faces whether to join in activities or volunteer your time. We have events on throughout the year to come along to which can be found on our website or social media pages, and our next big event will be our 100th Birthday at this location, which we will celebrate next year, and hope to see everyone again for even more cake!