Celestial beauty of the night sky 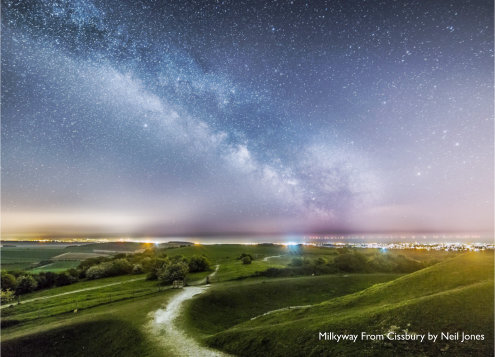 A mesmerising shot of the Milky Way over an Iron Age hill-fort and a crab venturing out for a night-time forage are among the stars of the South Downs National Park’s astrophotography competition.

More than 150 entries were received for the National Park’s first cosmic photography contest and a judging panel has now chosen the winners across three categories. Judging the contest was Dan Oakley, “Dark Skies” Ranger for the National Park, Graham Bryant, a Fellow of the Royal Astronomical Society, and Petersfield-based Tiffany Francis-Baker, author of Dark Skies.

Taking the top spot in the South Downs Dark Skyscapes category is “Milky Way from Cissbury” by Neil Jones - shown right. The stunningly-intricate shot shows off the chalk landscape of Cissbury Ring with an immense view of the Milky Way, as well as night-time views of towns and cities near the National Park.

Dan said: “This is the best picture for Dark Skies that I’ve seen – I love it. It’s got a bit of everything.”

Graham said: “I like the juxtaposition of the dark monochromatic sky and the colours of the foreground. The Milky Way has not been overprocessed and you can see it in all its glory.”

Taking second place is “Milky Way at Birling Gap,” by John Fox - below right. Tiffany said: “It’s just a stunning photograph. The length in the image really helps you to see the whole of the Milky Way. I could look at this photo for a long time.”

Third place is awarded to “Neowise over Arundel”, also by Neil Jones, with a stunning view of Arundel Castle and the Comet Neowise in the sky. Judges also highly commended a “Meeting of Old Men”, by Verity Stannard, showing the Long Man of Wilmington and the constellation of Orion.

In the Living Dark Skies category, the first prize is awarded to “Starry Crab”, by Anthony Whitbourn, who captured a captivating shot of a shore crab at Cuckmere Haven.

Dan said: “I’d give this picture 10 out of 10. It’s really fun, lively and quirky. We don’t often see images like this in the National Park.”

Tiffany added: “The colours are beautiful. It tells the story of nocturnal wildlife and all those creatures that come out when darkness falls.”

Picking up second place is “Gazing at Mars”, by Luke Chipperfield, who captured an enthralling image of his two children looking up at the red planet while at River Rother Nature Reserve in Petersfield, Hampshire.

Dan said: “There’s a great story behind this image and it’s the kind of photograph that really inspires people to go out stargazing for themselves.”

Third prize goes to “Night Fox”, by Richard Murray, who captured an incredible shot of a curious fox in his garden in Waterlooville, Hampshire. Judges also highly commended “Startrail Chestnut Tree”, also by Anthony Whitbourn and taken at the Cowdray Estate in Midhurst, West Sussex.

The final category to be judged was Our Magnificent Moon, which had no geographic limit on where the photograph was taken.

Taking the top spot is “By The Light of the Silvery Moon”, by David Oldham, with a hauntingly-beautiful shot of Lord’s Piece in West Sussex.

Graham said: “I love the silhouette of the trees and the mistiness of this image.”

Tiffany said: “I love this image because it really focuses on what the moonlight is touching and that’s a really interesting concept. It’s very ethereal, supernatural and captivating.”

Second place is awarded to “Our Magnificent Moon”, taken by Jashanpreet Singh Dingra. The incredible shot of the moon was captured from the Punjab region of India.

Tiffany said: “This is incredible photography of the moon and the detail in the craters is amazing.”

Third prize goes to “Moonrise over London”, by Martin Howe, who captured the moon rising at twilight next to St Paul’s Cathedral. Judges also highly commended “Moon and Venus Skies”, by Fiona Fillary, who captured the amazing night sky from her front garden near Storrington, West Sussex.

Winners will be picking up a prize of £150 for first place, £75 for second place and £50 for third place. All the images will be featured by the National Park during the Dark Skies Festival, which runs until the end of March and celebrates the South Downs as one of the best places for stargazing in the world. The National Park was awarded International Dark Sky Reserve status in 2016 and is one of just 18 across the globe.

The People’s Choice vote for the astrophotography competition launched on 1 March and the public had a month to vote for their favourite night-time shot out of a choice of 30 images, with a prize of £100 going to the winner.