It’s now eight years since Maurice Broomfield, an outstanding industrial photographer died and, as a fitting way of keeping his memory alive an annual competition for pupils in primary schools in and around Emsworth was set up. Suzy, his wife, was particularly pleased about it and helped to get it going in the early years. Latterly, her health gradually deteriorated and, on the penultimate day of 2017, she slipped quietly way. The work she did in the early days established that there was a need for such a competition.

The number of schools, the number of years in each school, numbers of photographs submitted by each pupil, all built up. This year was the 7th. Now that both Maurice and Suzy are no longer with us, it was felt the competition should be a memorial to both, which is reflected in the change of title to ‘The Broomfield Schools Photographic Competition’.

We are fortunate to have a group of their old friends who are experts in photography for judging and, sponsoring th competition, the Slipper Mill Pond Preservation Association (SMPPA). 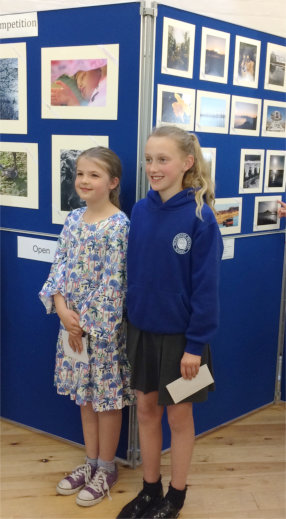 Winners are chosen from each School Year, the best of which are the overall winners, and get the top prizes in both an “open” category and one which involves Chichester Harbour and local wildlife. Those who enter really good photos but miss out on the prizes are awarded a ‘Certificate of Merit’.

The competition is supported by various groups; the Emsworth Community Association, who provide the venue for the prize giving, the Southern Co-Op who provide refreshments, the Emsworth Arts Trail who help to publicise it and, of course, the SMPPA.

The pictures can be seen over the Bank Holiday weekend and, later, year group winners can be seen in the Emsworth Co-op where people can study them while waiting to pay their bills!

Nick Broomfield, Maurice’s son was not able to join us this year (he lives in California). Jeff Thatcher (Chair of Judges) and Gill Thatcher did the honours. The atmosphere was happy and we learnt something about how a young photographer should be developing to become an expert.

To obtain copies of the entries and of the photographers themselves, contact: photos@smppa.org.uk