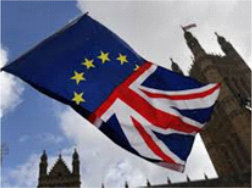 It was reported in December 2018 that pharmacists were struggling to obtain many common medicines including painkillers, antiinflammatories and antidepressants because patients and pharmacies are stockpiling medicine in preparation for a no-deal Brexit. The NHS temporarily pay more when the drugs are in short supply and there are currently 80 medicines on the list. Oxford University researchers estimate this extra cost of the drugs would have trebled in December from £11.4 million to £37.0 million. The government has stated that two million prescription items are dispensed each day in England alone. It is estimated that the total NHS spending on medicines was £17.4 billion in 2016/17. These figures are rising and last year the drugs bill grew by 7%.

The numbers are staggering. How much longer will the NHS be able to keep going like this? The question is why are so many people sick and in need of drugs? And why are the figures for most chronic illnesses going up each year? GP Dr Rangan Chattergee, resident doctor on BBC Breakfast and star of TV show Doctor In The House states in his book “The Stress Solution” that around 80% of all GP consultations are somehow related to stress. Stress can have devastating consequences on long term health including diabetes, high blood pressure, cardiovascular disease, strokes, arthritis, dementia, cancer, autoimmune disease, anxiety, burn out and depression. The World Health Organisation calls stress “The Health Epidemic of the 21st Century”. 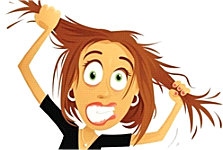 What do we mean by stress? In order to survive, living creatures (including humans) have developed strategies for coping when under threat. Commonly referred to as “The Fight/Flight Response”,  blood pressure and heart rate go up. Sugar, fat, adrenaline, cortisol and clotting factors are released into the blood stream to provide energy to the muscles, in readiness to run or fight. Senses are put on high alert. Digestion, growth, immune system, sleeping and the ability to learn new things are temporarily put on hold. These bodily changes are a good thing and can save your life. The problem arises when the stress response is not switched off. The changes to the metabolism, which help us in an emergency, start to have a detrimental effect. The result is chronic illness and eventually serious disease.

Triune of Health
What puts chronic stress on the body? Stress can be divided into three main categories: 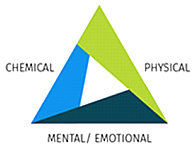 Eventually the body can no longer cope and symptoms such as headaches, back and neck pain, digestive problems, irritability, tiredness, weight loss or gain, depression and loss of libido appear. These are the early warning signs. Sadly, at this stage many people are given medication, which simply masks the problem and does nothing to address the stressful origins. If the person carries on in the same way, illness and disease are almost sure to follow. At some point, the damage becomes irreversible.

Chiropractors believe that the body has the ability to heal itself, before it’s too late. Chiropractic care uses no drugs and aims to correct physical dysfunction. This is effective and safe, but it is also essential to assess the patient fully, and give the correct advice to help prevent progression to irreversible disease. As well as seeking to relieve the presenting symptoms, at Emsworth Chiropractic Clinic we do our utmost to help patients discover why their symptoms have arisen in the first place. We guide them towards better health, so that the need for drugs can be reduced or eliminated. It is never too early or too late to ask for our help. Please ring us on 01243 373721 or pop into our clinic in North Street, Emsworth.