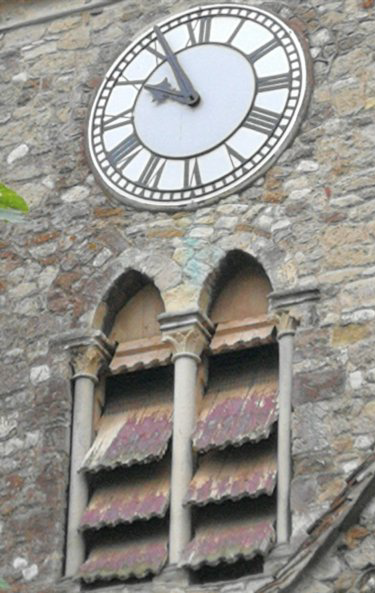 Postcode Publications is pleased to report that the renewal project is now fully funded following their donation reported in PO9&PO11 Edition 41- page nine - see it on line at: www.postcodepublications.com

Thanks go to the generosity of the church congregation, CCLrs Ray Bolton and David Keast, and all other donators.

The eastern facing louvres were the first to be removed to provide patterns for skilled craftsmen in their workshop. The louvres will again be adjustable to allow either louder bellringing to be heard, or softer sounds when closed during practice.

Completion of the louvres will be anther step in improving the appearance of Havant’s oldest continually-used public building – following the renovations of the clock faces, weather-vane and flag-pole in recent years (funded largely by supporters of Postcode Publications). This is part of St Faith’s ‘Big Build Campaign’, which along with the outside improvements, has also carried out extensive renovations to the inside of the building.

The Havant ringers are always on the look-out for new members, and welcome enquiries from anyone who would like to learn this ancient skill. Practice sessions are held every Tuesday evening, from 7.30pm; or, for an informal chat, call the Rector, Canon Tom Kennar, on 07881 025592, or email tomkennar@gmail.com