Washing the Dog’s Bottom - a new novel by ChrisTonge

Simon DeCandle believes that life owes him a living, except he is addicted to avoidance. His Girlfriend Marion has had enough of him, his mistress Lara dumps him, but he is captivated by the enigmatic Saliah. Following his heart and not his head, he becomes implicated in a criminal act. His innocence is undermined by his procrastination and dumfounds the police when they ask why he was washing the dog’s bottom.

The novel is about middle-class expectation and the falsehoods that are created by nostalgia. Simon DeCandle has high expectations and he assumes that life will deliver success but with the minimum of effort on his behalf. His relationships are doomed to failure by this indolent behaviour, and his sense of entitlement comes from the pretence of respectability that governed his parents lives. The novel is humorous with DeCandles buffoonery, also scandalous by his behaviour. The term - Washing the Dog's Bottom - is something the main character does to avoid doing something else that's more important - in other words he procrastinates. When I was thinking about a title, I saw an old copy of Catch 22 on my book shelf, and I suppose it was a conceit to think the term Washing the Dog's Bottom as a phrase to lob at someone who's procrastinating! - Therefore to Wash the Dog's Bottom means doing a job, no matter how revolting, to avoid doing a job you should be doing! I

was inspired by events that I witnessed as a teenager, and also in later life, by a few son's and daughters from so called successful families. Knowing they had relatively privileged childhood's, I found that there was a common thread that bound them together. Some would drop out of university or others would leave school after A levels and drift - much to the concern of their parents - and then would complain that any job that came up wasn't for them. I remembered one mother muttering that their son thinks that life owes him a living.

As regards where I got the inspiration for the washing bit. I once had to write a letter to an insurance company, and for some reason I kept delaying it. At the time we had a white Samoyed dog that had a delicate stomach. Without going into too much detail, I found myself cleaning his rear end rather than writing the letter! Bizarre I know! 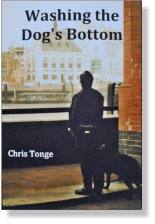 I  have been writing for many years, although this is my first published work. I started to write the book in January 2000, but if you compressed the actual time I worked on it, I suspect it would be about 4 years, not the sixteen years labour-of-love. There were periods when I didn't touch it, a whole year in one case. I also went about writing it in a rather haphazard way without creating chapter plans, but there was a basic structure in my head; I suppose I learnt how to do it as I was writing. I tried to put it past literary agents, but made the mistake of presenting the MS too soon. I learnt that they had their own objectives to fulfil and by that time I felt I had gone too far with the book to give up. Anyway, I heard about Feedaread.com and published it through them. It's an Arts Council funded site that is allied to some publishing houses. I do feel that I run the risk of being accused of Vanity publishing - this novel hasn't cost me anything to publish, only the cost for the proof copies at a cheap rate. I suppose to call something a Vanity publication is a pejorative term to those who haven't had to run the gauntlet of literary agents and fiction editors. I would love to have a literary agent and someone to edit my work, but I have entered into this project in good faith, and I have certainly been rigorous in the language, structure and then proof reading. I have also had the MS read by others to added their alterations and corrections.

I'm 57 and I live in Rowlands Castle. For the past 35 years I have worked in television as a film editor for the BBC in Cardiff, Birmingham and Manchester and now for ITV in London. I have also directed a few short films over the years that fall into the entertainment/lifestyle category.

I kept pursuing my writing after the favourable remarks I received in academic circles (I completed an MA in Film Studies) and through writing groups. There is certainly a transferable skill from being a film editor to a writer, in regards to pacing the narrative, and I hope that Washing the Dog’s Bottom has both a strong plot and conjures up strong visual images.

The book is available now on Amazon, also I hope to sign up to a distribution deal. There is also a Facebook page, called Washing the Dog's Bottom.