This year all students at Warblington school will be taking part in the Community Project. The idea behind the project is to raise the profile of the school in the community whilst ‘giving back’ to the community. Each year group has a different focus and the idea is that the students develop their leadership and teamwork skills via organising and running different events 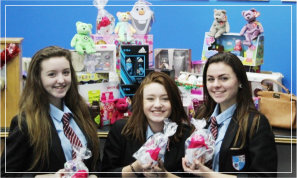 As part of the school Community Project the Year 9’s raised £382 for MacMillan Cancer Support through a tombola, sweet sale and Christmas Jumper Day.

They also designed Christmas Cards which were hand delivered to the local residents, along with nursing homes in the area. In some cases, this was the only card the residents received and they were very grateful to be thought of.

They also took part in collecting presents for the Wave 105 Mission Christmas which gives gifts to children in the region who would not necessarily receive a present at Christmas. “We were glad to make these children’s Christmas Special, as 60% of British people live under the poverty line and we felt this should be changed” said Courtney Myhill, Cassady Brooks and Cara Jeffery who were involved in the collection of over 100 gifts.

Some of our students spent two weeks wrapping presents and preparing games to use at the Pre-School for their Christmas Party. On the day, 6 representatives went to the Pre-School, helped out with a range of games and dressed up as Santa's Elves to deliver presents to all of the children.”

The Wizard of Oz 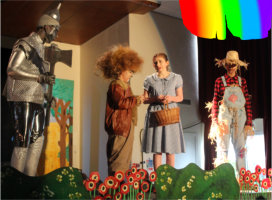 During the last week of term Warblington School came together to produce the production of Wizard of Oz.

Ms Wilkins and the Catering students were busy making mince pies in Food Technology, whilst Mrs K Whiteley-Fuller was producing the program along with students in English.

Mr Knight and Mr Charles from Information & Communication Technology were working hard with students to produce the lighting and sound for the show, whilst the Performing Arts team were busy keeping the cast calm for the opening night!

All elements of the show were produced by students from Years 7 to 11 and together they created a seamless production full of grace and humour.

Mrs Whiteley-Fuller, Miss Blundell and Mrs Elvy would like to say a massive congratulation to all of the cast and crew for their hard work in putting together such a successful event.