SOUTHERN WATER INVESTS £1.4m TO ‘KEEP IT CLEAR’ IN THE SOUTH EAST

Southern Water has just marked the first anniversary of its £1.4 million investment in a five-year programme to keep the South East’s sewers running clear of fat, oil, grease and other unflushables, such as wet wipes, tampons and nappies.

The ‘Keep It Clear’ campaign is aiming to raise awareness about the fact more than 23,000 blockages occur in the 39,600KM of sewers in Southern Water’s region every year, which can lead to sewage backing up and spilling out of people’s toilets, sinks or manholes and into their homes and gardens.

About two-thirds of these blockages are caused by fat, oil and grease (FOG) being washed or poured down the kitchen sink, or by unflushable items like nappies, wipes and tampons being flushed down the toilet, instead of being put in the bin.

“Sewer flooding can be a really upsetting experience for our customers, so we want to raise awareness of what we should and shouldn’t be putting down our sinks and toilets, in order to keep drains and sewers flowing clear.

“Our sewer pipes are much smaller than many people think – only about 10cm (four inches) in diameter, which is about the size of an orange – so the only things we can safely flush down them are the three Ps – pee, poo and paper.

“All other items, like nappies, cotton buds, wet-wipes or oil and leftover food in the kitchen, should all go in the bin rather than down the kitchen sink, and into drains and sewers.”

To tackle the problem of sewer flooding, a dedicated Southern Water team is visiting homes in 2,000 blockage ‘hotspots’ between now and 2020 across the South East.

The teams are knocking on doors to chat to householders about how to best dispose of items, as well as lifting manhole covers to look for blockages, using CCTV to inspect sewers and using high-powered water jets to clear any problems they find.

The campaign team is also visiting schools and giving talks to community and business groups to help raise awareness.

During the programme’s first year, the team visited more than 7,000 homes in 378 ‘blockage hotspots’, visited 456 restaurants, cafes and takeaways and lifted more than 1,700 manhole covers to look for blockages.

As part of the campaign, Southern Water’s team of Network Protection Officers are also rolling out a programme to visit some of the 28,000 food outlets and restaurants to ensure they are disposing of fat, oil 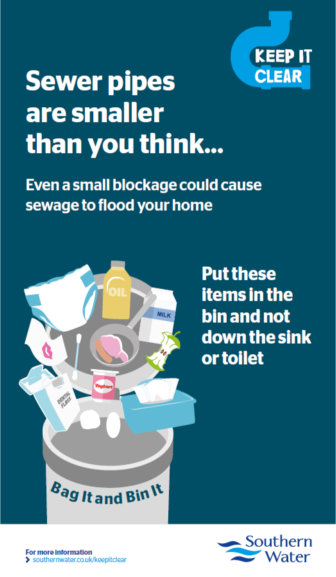