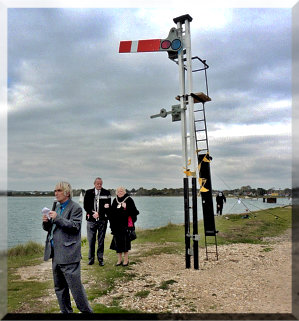 17 October 2015 saw the unveiling by the Mayor of Havant, Councillor Leah Turner, of the restored up-home signal for Langstone Bridge signal box, which was operated by lever No 2. There was an up-distant signal situated further back in the direction of North Hayling. On the Havant side of the bridge there was the down-home signal for the bridge signal box and, on the same post, facing the opposite direction, there was the up-distant signal for Langstone Station signal box. The work, which took almost one year to complete following its removal in 2014, was managed by Ian Clark Restoration and carried out by S&T Cover Ltd of Eastleigh. It was paid for by a grant from the Heritage Lottery Fund and commissioned by the Hayling Billy Heritage Partnership Board (Hampshire County Council, Havant Borough Council and Haylingâ€™s Best).