The author is an accomplished and acclaimed artist and psychic. Born and raised in Lincolnshire, Joan is now in her 80’s and has lived and worked in Leigh Park, Bedhampton and Portsmouth since the 1950's. She still continues to paint and work, giving spiritual messages and guidance to people through her drawings.

This moving and inspirational memoir follows the incredible journey of Joan Smee through a lifetime of experiences full of high and low points: suicide, love, hardship, abuse, incarceration and so much more! She has had to make heart-wrenching and life-changing decisions along the way – perhaps too many for one lifetime! It has been anything but a simple life! 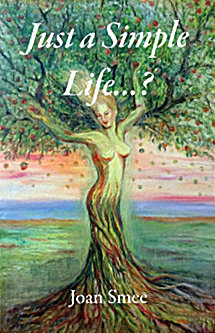 Here is a brief extract from the time when Joan lived in a Nissan hut in Leigh Park in the 1950’s.

My parents-in-law were re-housed to a Nissan hut in Martin’s Way, Bedhampton. There was a naval camp nearby and the Nissan huts were requisitioned after the war and used as temporary housing by Portsmouth City Council. Portsmouth was heavily bombed during the war and extra housing was badly needed.

We visited Ray’s parents there every Sunday. A friend and neighbour of theirs, Betty, was looking for lodgers. I was pregnant with my second child at the time and so we went to live with Betty. She had two boys and was also pregnant. It was always warm and cosy there with windows in each room. I bought two old chairs, a mat, a table and a bed-settee. All the furniture was moved by horse and cart to our new home. The hire of the horse and cart cost me 10 shillings (50p). There were fields and countryside all around us. I was happy living there and my second and third children were born there.

I had a wonderful midwife, Nurse Gunn, who was German. She delivered Keith and Marian. I named Marian after her and she visited the posh houses all around the Havant and Rowlands Castle areas.

Before the midwife came I got up early and washed the kitchen floor because she was so particular. German women are like that and she was a bit neurotic. At that time I had tea chests as tables, turned upside down. I didn’t have any carpets on the floors and I had two armchairs. I have had lots of problems with my pregnancies and they have affected every aspect of my life. After my haemorrhage, Keith the doctor told me not to have any more children because it could be fatal for me.

I was still on the council housing list because I always did everything the right way. Betty had her baby and came out of hospital. Betty’s mother became ill and she decided she would go and live with her and look after her. Betty asked me if I would like to buy her furniture. It was heaven sent! I bought it all; carpets, furniture and her sewing machine. I had her gingham curtains with lovely little tie-backs. I paid £7 for the lot and was very pleased with the outcome. Betty was happy because she didn’t have to worry about it all and so off she went to live with her mother. At the time the wages I got from Ray were £5.18 shillings (£5.18.0d) a week as a coalman. I didn’t know it then, but Ray used to keep quite a lot of his wages for himself but he never gave me a penny more than the amount he thought was sufficient for keeping house and feeding us all. I told Ray that Betty wanted £7 and I managed to scrape up a bit of money from the in-laws, a pound here and 10 shillings there. I made the house as comfortable and nice-looking as I could. We had logs for the fire, it was warm and snug and we had a bathroom with a separate toilet. It was heaven-sent and was like a palace to us! The rent cost 12 shillings a week and we were very happy there – for a while anyway!