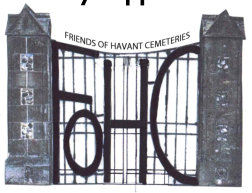 Friends of Havant Cemeteries have received £9,900 from the Heritage Lottery Fund (HLF) for an exciting project: to enhance the environment and share the heritage of our local cemeteries by adding an information board, new gates and a bench to the historic Dissenters’ Cemetery and a further information board at the junction of New Lane and Eastern Road, Havant. Made possible by money raised by National Lottery players, the project focuses on the social history of the area, and its wildlife, both flora and fauna.

The group intends that the gates (replacing old gates, one of which was stolen), information boards and bench at the entrance to a previously derelict area will change attitudes and draw attention to an historically important area now being sensitively managed. In our regular volunteer sessions we are also making headstones safely accessible through regular maintenance and reinstating of old pathways visible in 19th century maps. Later on in the project the group will be running an open day, in conjunction with the Spring Arts and Heritage Centre, to invite people into the cemetery for guided walks, a butterfly count and photography sessions. Support will also be provided for researchers to investigate family histories from inscriptions on headstones.

Commenting on the award, Christopher Evans, chairperson, said “We, the Friends of Havant Cemeteries (FoHC) are delighted to announce that we have been awarded a Heritage Lottery Grant which will enable us to make improvements to the historic Dissenters Cemetery and the New Lane Cemetery. All of this is designed to make the area more welcoming, and encourage local residents and visitors alike to explore the cemeteries, which provide a wealth of social history and are a haven for wildlife.”