Emsworth geared up to celebrate the Queens 90th Birthday with a Community Street Party on Sunday 12th June. The Queen turned 90 on April 21, but her official birthday is in June - this year it fell on Saturday June 11 and the finale of the official celebrations was a giant street party on the Mall. The nation’s focus may have been on the celebrations in the Mall - with tickets at £150 each, but in Emsworth it was all about celebrating as a community.

Emsworth’s St. Peters’ Square was closed off for the afternoon but rain stopped play and a good old-fashioned street party took place in doors! There were two afternoon tea sittings and anyone who is 90 this year or over was invited free of charge. Everyone else paid £5, and because the whole event was sponsored by the wonderful Wednesday Group, all proceeds are going to the Chichester based charity Stonepillow.

Entertainment was provided by Paul King and his traditional Punch and Judy show and the wonderfully named ‘Victoria Sponge’ (local resident Judith Cooper) who played Ukulele and who had prepared a sing-along medley specially for the occasion. Everyone was welcome and for those who couldn’t get a ticket for the afternoon tea, there was lots to enjoy with ice creams, tea and cake stalls, local award winning sparkling wine from Hambledon Vineyard and of course the entertainment. The new Mayor of Havant, Councillor Faith Ponsonby an Emsworth resident, opened the proceedings and sat down to afternoon tea herself. It was all about Emsworth doing what it does best and celebrating as a community - even Emsworth’s symbolic Swan logo was dressed up for the day! None of this would have been possible without the support of local groups and businesses. The Wednesday Group is a small group of Emsworth Woman who for the last few years have organised Christmas Fairs and wanted to put the proceeds back into the community – we are indebted to them for their support of this street party. Sandwiches came from from Driftwood Café, and Heidi’s Swiss Patisserie helped with by supplying scones, Support also came from Havant Borough Council and Emsworth Methodist Church and Pastoral Centre.

“This was such a great idea, celebrating the Queens 90th Birthday and bringing the whole community together, the fact that we could support it, and that it will also benefited Stonepillow is just the icing on top of the ‘afternoon’ cup cake” Mrs. Joanne Thomas, Emsworth’s The Wednesday Group. 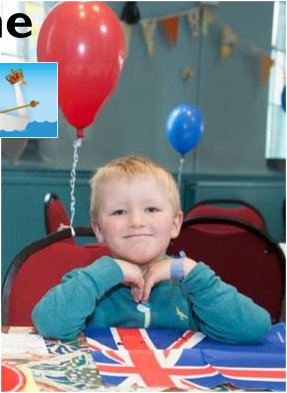 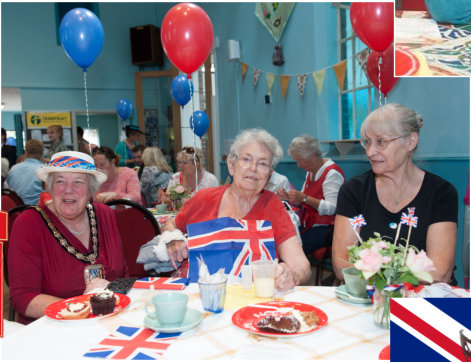 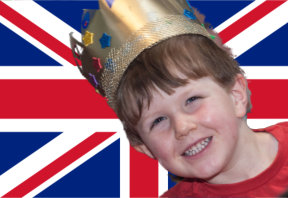 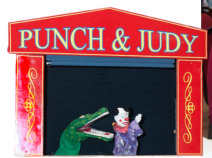