Over the last 20 years I’ve been lucky enough to turn a life-long interest in “old things” into my current day jobs – auctioneering in Emsworth Auctions and running an antiques & collectables shop, Emsworth Antiques Etc. in the town’s West Street. 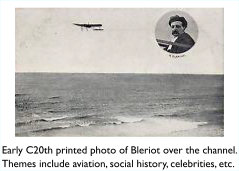 It’s that time of year when friends begin to send us postcard messages ‘wishing we were there’; skiing somewhere cold or scuba diving somewhere hot. (Generally hokum: they don’t want our company, they want our envy.)

Probably without realising it, they’re taking part in a tradition stretching over 120 years, since the “Golden Age” of postcards began in about 1898. And if you hold onto these cards – and maybe others as well - a little bit of research tells me that you, Dear Reader, may be a Deltiologist without even knowing it!

Deltiology is the world’s third largest collecting hobby, behind stamp, and banknote/coin collecting, and is indeed the collecting of postcards.

With such a huge choice, postcard collectors generally limit themselves to certain eras, countries or themes. Some collect historical / military events, others pictures of cats, a particular artist or illustrator, locations to do with past homes, current place of residence, legible car number-plates, the recipients town or street or name, saucy seaside fun, royal events, disasters, actors, advertising, portraits, and so the list goes on. And then there’s the postal franking or cancellations, e.g. events with first day posting date.

Then you have RPPCs – Real Photo Postcards – where the finish is like a glossy photo. Town views from the early days are very popular, especially if the town is small and has seen a lot of change. Messages such as “Dear Clarrie, Will be with you for tea at four today” were not uncommon.

I have to confess to being a Deltiologist. I collect all sorts, but one of my favourites is an early 20th century card written in a child’s hand. The message is plain and simple : “Dear Cook, Cake lovely. Please send more.”