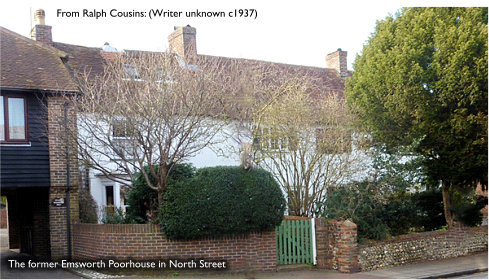 Over 100 years ago a local historian wrote: The poor, for a series of years, have been a great and increasing burden on the parish. So the present-day problem of the Public Assistance Committees is nothing new! The closing of the casual wards at Havant does not only mean the end of the chapter, but the opening of the books relating to the history of the local poorhouse.

But if the progress through life of many of the younger folk who have had to spend a period in the Havant Casual Ward could be revealed, it would be found that a good proportion have made good and proved the truth of the saying that many an honest heart beats under a ragged coat!

How many of our readers are aware that Warblington, too, had its poorhouse, and in the very heart of the town of Emsworth! Mr A. W. Rubick, a well-known local historian, reminds us that Emsworth's poorhouse comprised a group of cottages just to the north of the North Street entrance to St James's Churchyard. These cottages are still in a good state of preservation as private residences.

The poorhouse, built on a piece of waste adjoining Emsworth, was: Granted by Thomas Panton, Esq. May 22, 1776, to several of the principal inhabitants, for a term of 1,000 years, the survivor of whom assigned the home and premises to the rector, and his successor for the time being, in trust for the parish.

The building was sufficiently capacious for the purpose, and in March 1814, contained five men, seven women, ten boys, and nine girls. We are told:

The men, in mild weather, being old and infirm, pick oakham, the women are employed in needlework and household affairs; boys ten years of age work in the sail manufactory; those, under that age go to the parish school.

The men and women live in separate apartments, but eat together; the old people have three hot meat dinners, one soup dinner, two cold meat dinners, one bread and cheese dinner; for breakfast, bread and butter, except the boys and girls, who have gruel; for supper, bread and cheese and beer. The master is allowed £20 per annum for collecting the rates, and farms the poor at 5s. 3d. (26p) per head, and he supplies them with every necessary, except physic, wine, and spirits.

The parish school, upon Dr. Bell's system, was, we are further informed:

Established here by the zeal of the inhabit¬ants, June 25, 1812. and occupies the workshops adjoining the poorhouse, divided into two apartments for boys and girls, in a neat and becoming manner. In March, 1814, there were 60 boys and 50 girls, who attended from nine till twelve and two till five, and were taught Eng¬lish, writing, and accounts. Mr. John Small, the master, who diligently discharges his duty, is paid £50 per annum. Mrs. Bevis superintends the girls' school, and receives £25 per annum.

Parents desirous of sending their children to the school had to apply to the Guardians, who admitted them at five years of age, and continued their education until they reached the age of 12.

This excellent institution bids fair to confer great benefits upon the neighbourhood, and we may look forward with confi¬dence to a general improvement of the morals and conduct of the lower classes of the community, whose instructions and improvement have been hitherto much neglected.